Get the industry-standard software for live color grading that integrates and controls your digital imaging processes on set – enabling visualization and sharing of the DP’s and Director’s artistic intent.

What Is Pomfort Livegrade Pro?

Livegrade Pro is the most trusted software in the market that addresses all digital-imaging-related requirements of the camera department. It helps you to:

Control live images via vectorscopes and waveform, keep a constant eye on quality, and make color adjustments on your images as necessary. Being closer to the desired final look already on set ensures that footage looks precisely the way it was intended.

Capturing and reviewing reference material and frame grabs from camera live images helps to ensure consistency across your project from scene-to-scene. Being consistent in different production settings or from lens-to-lens increases the overall quality of the footage.

Monitor live camera metadata embedded in the HD-Signal signal and store them in the shot library together with the preview image. The visual and technical information generates objective and trusted insights about the connected cameras and their live images.

Tailored to the Film Set.

Color grading multiple camera live signals requires dedicated concepts for the grading application. On set, there is not much time for anything, so controls must be spot on, reduced to the necessary, and highly accessible.

Livegrade can record media and collect metadata from a broad range of sources – from the cameras themselves via HD-SDI, through remote network connections, or manually edited by the operator.

All this information is automatically stored in Livegrade’s shot library together with each look – creating a comprehensive shot log for the entire film project.

That information can be used to look up camera settings of previously shot scenes, display reference images for consistency of cinematography, or communicate reports to colleagues on set and beyond.

Compatible With Every Workflow.

The looks created and adjusted on set are highly valuable directly for the camera work (e.g., when making lighting and exposure decision “through” a look preview), but they enfold their benefits especially when shared with others – for instance, for providing looks to dailies creation or VFX.

* Only available in Livegrade Studio

All the Tools Needed.

Color grading on set needs to balance the respect for the creative intent with technical requirements for maintaining visual consistency between shots and scenes. Examples of that are adjusting the digital look under different lighting situations, the compensation of exposure decisions, and the correction of different lenses’ color cast needs.

Choose Your Hardware and Setup

Stay Flexible With a Wide Range of Devices.

Livegrade Pro supports grading panel controllers from Tangent, including custom knob mappings. Livegrade also comes with a plugin for the display buttons of Elgato Stream Deck. And with support for MIDI controllers, you can use or even build your very own button and knob interface.

Also, other devices such as BoxIO and Alexa Mini via CAP can provide reference still images for a smaller setup where no video recording is required.

Livegrade’s Output Colorspaces let you inspect and manage looks depending on their output colorspaces for streamlined processes in color pipelines with multiple outputs (such as HDR/SDR dual monitoring).

Choose the appropriate output colorspace value for custom LUTs on import and benefit from automatic colorspace-tagging on LUT export for round-tripping with other Livegrade systems.

Interactively Grade via ASC-CDL and Upload Looks as In-Camera LUT.

HDLink support only up to OS X 10.10:
Up to now, there is no driver for HDLink available from Blackmagic Design for OS X 10.11.
Please be aware that you are not able to use HDLink devices on OS X 10.11.

LiveGrade Pro adds support for an in-camera grading workflow with the Panavision DXL2. LiveGrade Pro comes with a new feature to upload looks into the DXL2 camera. This applies the look e.g. to the viewfinder, but also adds the look metadata to recorded clips. An additional LUT box can be used for interactively adjusting the look based on the log output of the camera.

Our software products are based on the latest macOS technologies, therefore we cannot support older versions of macOS.

A detailed list of all changes can be found in the Livegrade Pro 5 changelog.

Working with Looks: Copy & paste looks between slots
Library Slot: Adding a reference from another slot to the library slot

Tangent Wave and Wave2: Customize the user interaction with the Tangent Mapper

LiveGrade Pro 4.2 now supports an in-camera grading workflow with the Panavision DXL2:
Looks created in LiveGrade Pro can be loaded directly into the DXL2. This way the look is instantly written into the clip metadata and can be passed on directly with the clips to post production. For interactive grading on the live image of the camera, an additional LUT box can be used.

Watch the new video by Panavision to learn more about this new feature. Follow Michael Cioni as he walks you through the new integration and its benefits – from the film set to post production.

Dynamic Metadata: Extension of live metadata support to a broad range of setups and devices. Use your existing devices to access live camera metadata in LiveGrade Pro, including: 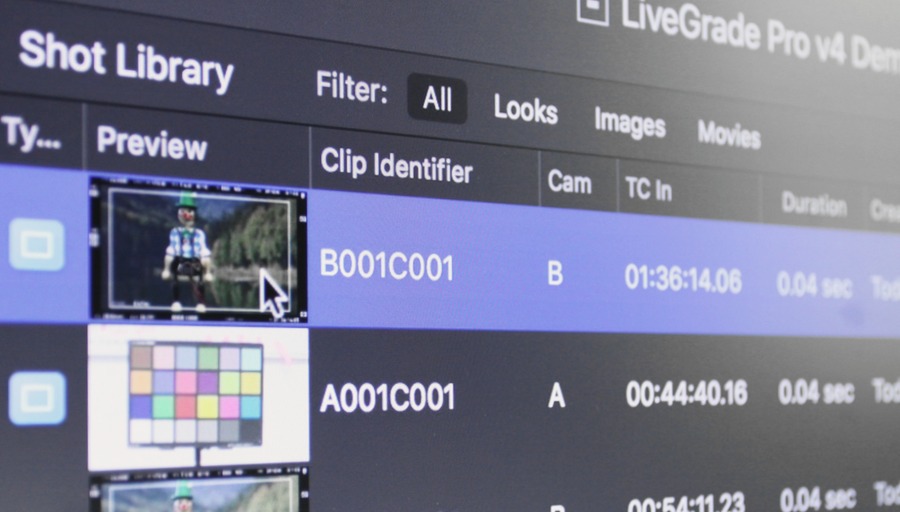 LiveGrade Pro introduces a new Shot Library, that comes with lots of new capabilities for logging a shooting day. The Shot Library stores camera-related information as well as look metadata. It allows easy browsing of past shots with frame grabs and captured video. You can now also enter metadata in advance for an upcoming shot. Information can be grouped hierarchically into Folders and Bins as familiar from Silverstack. All information can be exported in PDF reports. 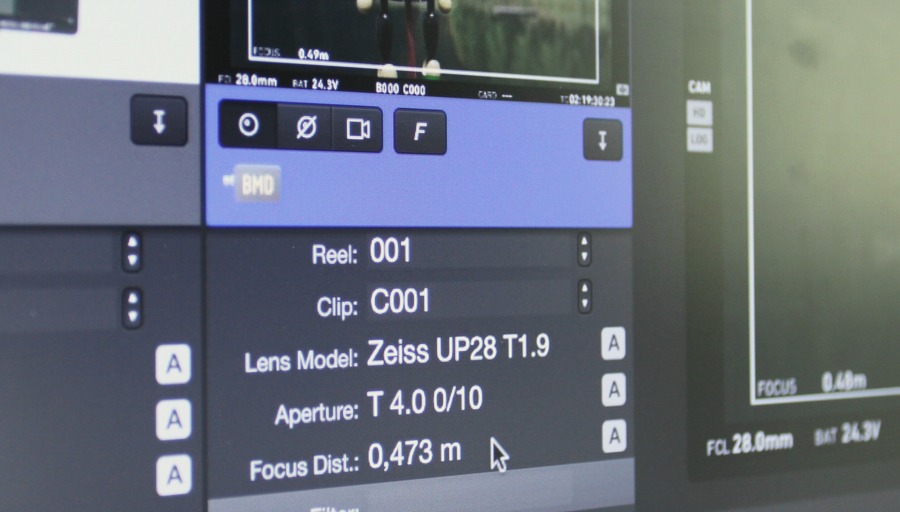 With a video device from AJA or BlackmagicDesign, LiveGrade Pro can capture multiple camera signals. Professional cameras such as ARRI Alexa, Sony F55, and Panasonic Varicam embed extensive camera metadata into the HD-SDI outputs as so-called ancillary or ANC data. A new slot bar displays live metadata from cameras for each slot right beside the live image. All information gets stored in the new Shot Library. 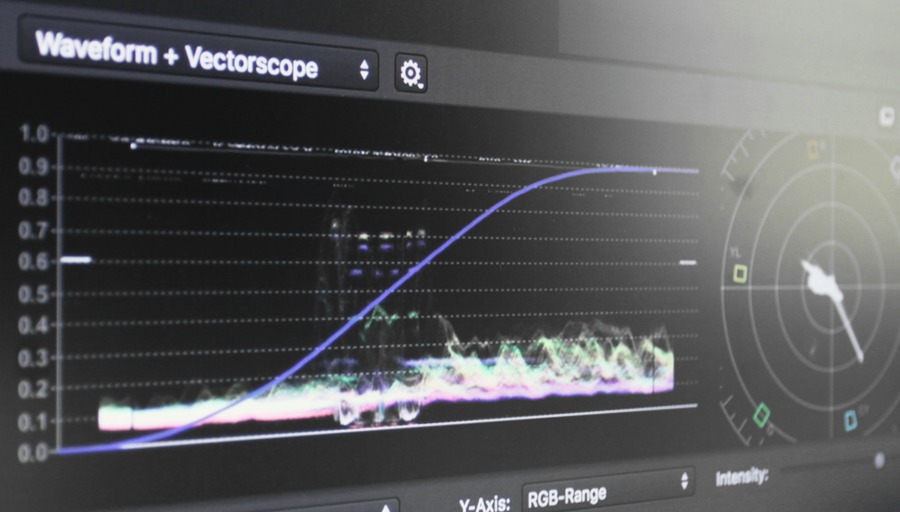 Video scopes are the tool of the trade for judging exposure and white balance and help to control and adjust a broad range of camera settings. LiveGrade Pro offers three kinds of video analysis tools: Waveform, vectorscope, and a histogram. Each tool comes with settings to customize the processing and display to individual needs. The waveform also adds the display of the resulting curve of all current color transforms and thus integrates well into the look management and grading workflow.

Did you know that you can update a Look or Still in the Library and, at the very same time, replace the still image that is associated with the look? It’s like killing two birds with one stone!