Automatic color and texture matching that addresses problems of multicam and stereo shoots.

RE:Match is our solution to help you with camera matching problems.

Re:Match takes the color and tone from an image and transfers it to another image. People who are not familiar with color correction can use it to get more matching clips, and professionals can use it to pre-grade to simplify their workflow.

RE:Match Pro has all the above features and adds the following features:

Johnathan Banta, a stereo pipeline designer, says “The smart guys at RE:Vision Effects have created a very cool toolset that I have been lobbying for a long time. Brilliant!” 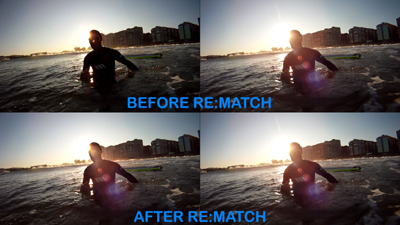 Automatic color matching for multicam and stereo shoots. Features in stereo can be matched, taking occlusions into account. In this example, you will see that RE:Match matches one view to the other, despite the fact that the two camera system picks up slighty different colors in each view because of the reflective property of the car.

The same OS and hardware requirements for the version of the Host that you are using.

RE:Vision Effects Twixtor, ReelSmart Motion Blur, and RE:Match offer Regular and Pro versions of the software, so how do you know which version you need?

This tutorial covers the basic concepts and use for RE:Match Color. After Effects and Premiere are used in this tutorial, although the controls are similar for all host applications.

RE:Match takes intuitive color and texture matching to a whole new level by addressing common problems on multiple shot, multicam and stereo shoots. RE:Match is a set of plug-ins to match one view of video or film to another so that it looks as if it was shot with the same camera and settings. RE:Match assumes that both image sequences are taken roughly at the same location but perhaps were not shot at the same time or from the same point-of-view.