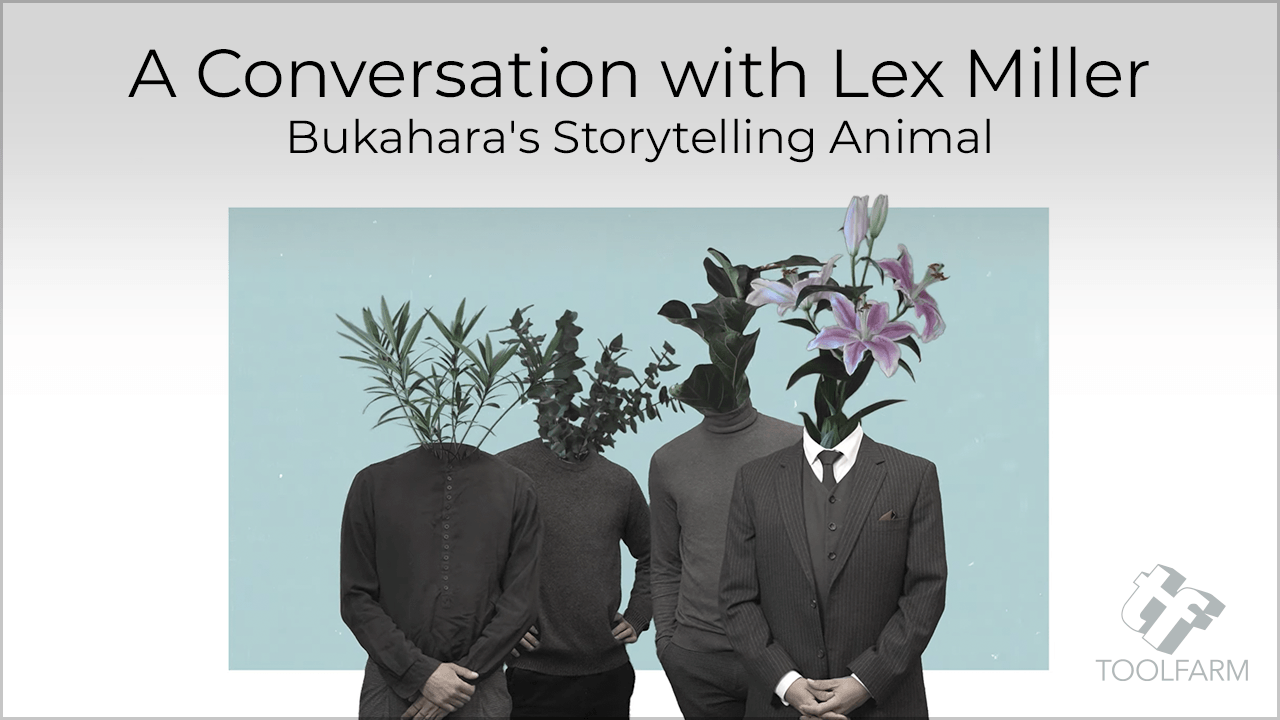 A couple of weeks ago on Reddit, I saw this amazing music video for Bukahara‘s Storytelling Animal. This song is catchy and thought-provoking. I immediately loved the stylish and extremely creative music video. What can I say? It really spoke to me.

I contacted Lex Miller, the director/designer/animator/editor/compositor behind the video, and asked him questions about his work on the video. Lex graciously gave me a full interview about the project and his work.

First, check out the video.

The Interview with Lex Miller

Michele / Toolfarm: Hi Lex! I’ve watched the video for Storytelling Animal over and over and it’s really an incredible piece. There are so many layers, some that remind me of a Magritte painting… meets Oi Va Voi. How did you get started doing music videos? Can you tell me a little about your background?

Lex: I am a 28-year-old freelance graphic and motion designer from Munich, Germany. Music has always been my greatest passion and from early on, I’ve been playing in various bands. That is actually what got me into graphic design. We were always in need of concert posters and artwork, so I became interested in Photoshop and started creating those myself.

Over the years, my portfolio grew and I finally applied to the master’s degree program Multimedia Art at the University of Applied Sciences Salzburg (even though my Bachelor’s had nothing to do with design and art). There, I learned a lot about different fields of design. However, my motion graphic skills are completely self-taught (thank you, YouTube!). Around this time I helped out on a music video set for a band of which I knew some members. I told the singer that I do motion design and a few months later, they asked me if I could make an animated video for a song of theirs.

Toolfarm: I love that you are self-taught. I really believe this can give artists a unique style to learn in this way. It allows you to problem solve on your own which often leads to interesting new ideas and techniques.

In the video for Storytelling Animal, you have such a unique style and color palette. There is a lot happening with video, text, textures, etc, and yet it still feels incredibly simple and organized. Your elements all work beautifully. How did your concept come about? I know we mentioned Magritte previously. I am wondering where you pulled your inspiration from? Can you talk about how the idea came together?

I definitely also drew some inspiration from Surrealism. When I thought about how to recreate this kind of parallel world that conspiracy theories depict, I instantly thought of these odd-worlds painters like Dali or Magritte created. I wanted to depict the notion of conspiracies in a more artistic and playful way than the usual red-threat-on-a-pinboard-look.

Toolfarm: The collage analogy translates so well visually. Where did you find the elements that you used? I am picturing a folder with photos and elements that you’ve collected over the years, as the video brings about that kind of feeling of nostalgia with storytelling.

Lex:  I always try to use as many analog elements as possible, because in the end, that’s what makes the video unique. For example, the rectangles in the background are photocopies of a wrongly developed camera film.

For footage that was not possible for me to record for myself, I used royalty-free videos that I found online. I always prefer self-recorded footage, but sometimes that’s just not possible. So I made this rule for myself to only use stock videos when they’re not the “star” of the scene. For example, you wouldn’t see a difference if the airplanes flying out of the head were recorded by me or if it’s a stock video. They are just a small part of the collage. So in cases like that, I allow myself to use stock footage.

For those old and nostalgic-looking videos, I used the Prelinger Archives. This is a huge collection of videos that fall into the public domain since they are so old. It is such a great resource, and I can spend hours aimlessly watching those videos.

Fun fact: When the song goes “some say there’s a heaven above and down there’s a hell”, in the video you can see old footage of children playing hopscotch in the streets. In German, this game is called “Himmel und Hölle”, or heaven and hell. I like to use little twists like these to create a connection between video and song without directly showing what is sung.

Toolfarm: Very clever. I feel like that’s an Easter Egg!

Can you talk about your workflow and how you managed so many images, text, and textures along with video elements?

Lex: First, I synced the original footage with the song and cut it in Premiere Pro. Then I replaced every scene with an After Effects composition containing the footage. That way, I didn’t have to worry about lipsync in After Effects. Even though it has its issues, Adobe’s Dynamic Link is a blessing for this workflow.

Toolfarm: I was also wondering if some elements were video or 3D rendered, such as the items on the band members’ heads, especially the concrete and plants. I can imagine you had hundreds of layers.

Lex: I’m not familiar with anything 3D, so I filmed everything and composited it on the heads. For the elements on the faces, I just motion tracked the tips of the bandmember’s noses and mapped the elements and basic shadows on them.

The plants were more difficult to do, though. I actually had to move them according to the person’s movements to sell the illusion. Behind the scenes, that must have looked pretty odd – me, alone in a room, making a plant dance in front of a camera. It was the same thing with the concrete. That’s a real block of concrete that I put on an old record player to make it turn elegantly. I really love this part of the process – improvising and finding tricks to get what you have in mind.

Toolfarm: That’s very cool. I think that using practical effects is often overlooked by artists, but that is an elegant solution. I think this is actually what attracted me to the video in the first place. It’s so elegant.

On my first viewing, I thought it was “simple” because it’s so clean and stylistic. Yet, you have a lot of keying, motion tracking, animated handwriting, circles of newspaper timed perfectly to the beat, and more. It’s far from simple. What were some of your biggest challenges?

Lex: My biggest challenges came with everything involving plants. They were not easy to color-key, it was difficult to mimic a realistic movement, and masking out the heads of the musicians was also surprisingly time-consuming. It was also challenging to solve these technical questions while at the same time coming up with a coherent style and having an approaching deadline.

Toolfarm: I know that feeling of approaching deadlines well and time-consuming shots, but you certainly pulled it off. Which shots are you most proud of?

Lex: I’m most proud of the scene where the plant-head person turns around (at 3:05). I turned the plant with the perfect speed and I love this odd feeling of depth the turn creates. I also like the collages at the end of the video. They didn’t take much time to create and are way simpler than the rest of the video. Yet, they somehow evoke the strongest emotions.

Toolfarm: It is really cool. You’ve revealed a lot here, and I hate to ask for more, but did you learn any workflow techniques that you could share?

Lex: I learn so much with every project. It might be obvious for everyone who works a lot with keying, but during my work, I realized it saves so much time to pre-render keyed-out footage or elements with a lot of effects on it. Also rendering out composited objects like the person with the tv as a head. It involved so many precomps and layers (shadows, tv programs, etc.), that it was almost impossible to preview it. Not only does it speed up the preview, but you also kind of check a box in your head and you’re not tempted to come back to it all the time and pointlessly tweak settings.

This wasn’t your first video for the band. Previously, you worked on the video for Friend. They are really very different. This video reminds me of an animated child’s book with illustrations and text.  It’s so whimsical and fun and it works perfectly with the mood of the song. Did you draw everything yourself? Or did you work with an illustrator?

Lex: The band approached me after they saw an older music video that I had animated. They sent me the song and I thought up different ideas for the music video. When I first heard the song, I immediately imagined some kind of journey in my head.

I liked the idea of showing the places where the moments the song tells about happened – without showing directly what is sung or without showing characters. I find it so beautifully odd that something timeless, like a place, or a tree, is like a vessel for people’s memories. And everyone walking by has a different, unique memory connected to it. This is what I wanted to emphasize with this concept and that’s why there are no real characters in it.

I still needed something to guide me through this world, so I imagined those two little lights that we follow on their way. They also represent my interpretation of the song’s message about life and loss. I illustrated everything on the iPad and put it together in After Effects. To be honest, the project looked quite chaotic, because it has so many layers and there are no cuts between the scenes, so it basically is just one huge composition. In hindsight, I would do this very differently. I still like the overall look though and I would love to do more illustrated videos as well as more frame-by-frame animation like the flowers at the end of the video.

Toolfarm: Thank you so much, Lex, for talking with me and sharing so much about your project. Congratulations on the video. You have a very bright future ahead of you.