If you missed the  Maxon 3D & Motion Design Show – November 2021 Edition, or maybe you just want to see something again, watch all of the presentations below!

You can continue watching the full show here if you like. Alternately, we listed the individual presentations so you don’t have to scrub through them to find the presentation you want to see.

The show begins with the live Q&A with Paul Babb and Mathias Omotola from Maxon, with guest Jules Urback of Otoy. They’re talking about the new integration of Maxon and Otoy, NFTs and Blockchains, and more. Then, onto the presentations.

Jonathan Winbush is a Hollywood-based motion graphics artist and founder of Winbush Immersive, with over a decade of experience working in a wide array of mediums from traditional television to virtual, augmented, and mixed reality. In fact, he enjoys pushing creative boundaries. Since 2006 Jonathan has worked on a number of exciting and high-profile projects for Marvel, Warner Bros, Hasbro, Discovery Channel, and others.

Doug Appleton is Perception’s creative director and resident VFX wizard. Throughout his career, he has worked on a range of motion graphics projects. For example, he worked on detailed UX interface projects for high-profile security clients. Also, Doug was the lead animator on title sequences for Avengers: Age of Ultron.

Eric Say is an Emmy Award-winning graphic designer and the owner/creative director of Gameday Creative, a creative agency based in New York City. Specializing in sports graphics, he has worked on a number of notable sporting events, including the Super Bowl and the Olympic games.

Dan Pierse has been creating motion graphics for film and broadcast since the late 90s and is now the senior designer for on-air promos at Fox Broadcasting Company. Here, he has worked on a number of promotional materials for popular shows such as The Masked Singer, Empire, and The Voice.

Sabour Amirazodi is the technical marketing engineer at NVIDIA. He has over 16 years of multi-platform experience in entertainment, interactive gaming, experiential marketing, and media production. He delivered a variety of creative projects including an entire theme park experience, visual effects for Netflix features, a visual experience for Pioneer DJ, an interactive animated Disney commercial, and commercials for Apple. 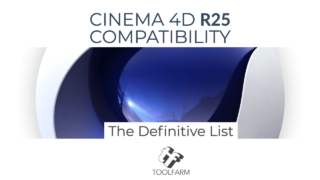 We’re elated about the release of Maxon Cinema 4D R25. But, as with any major release, the issue of compatibility comes into play. Developers are working diligently to make sure everything will work smoothly with the new R25 release.

We have put together a list of products and information to keep you informed about plug-ins and product compatibility. It’s all in our new FAQ, so check it out!