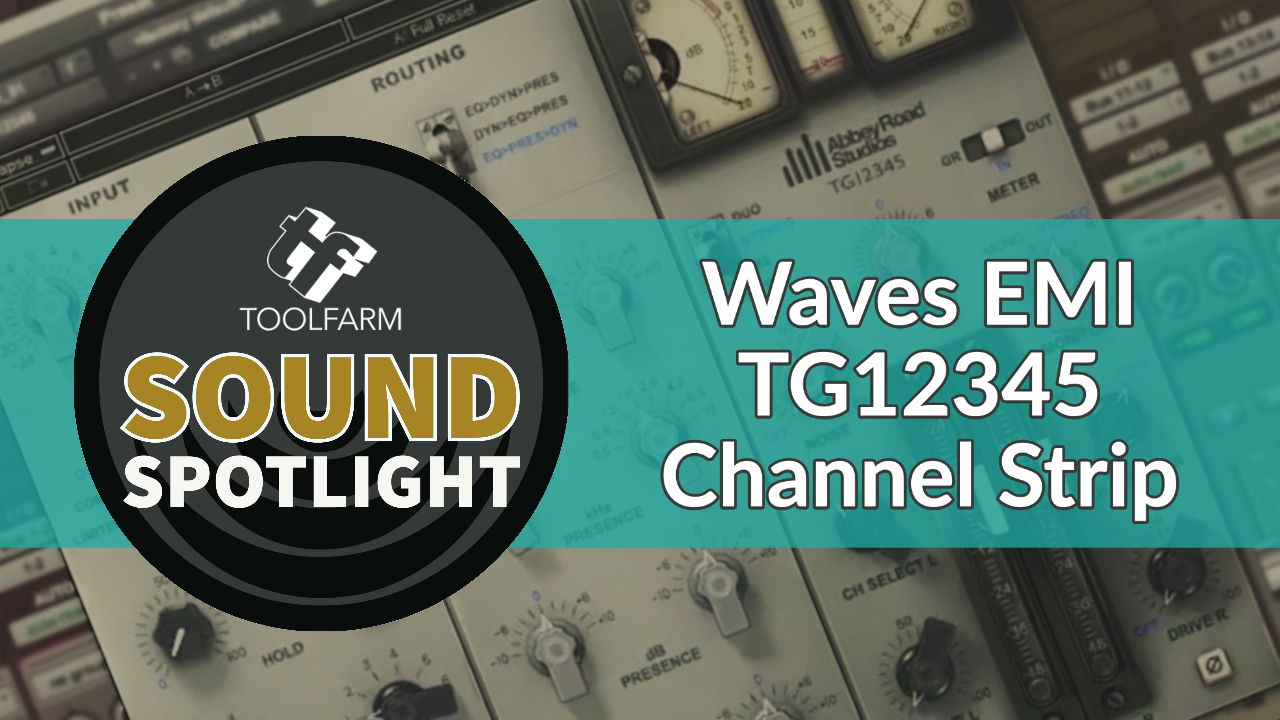 Welcome to our new audio series called Sound Spotlight. In this series, we’ll feature some audio plugins that you may not be so familiar with, especially if you come from the video world. A lot of these plugins have really interesting histories. We’ll give you a few of their stories and some fun facts, plus some tutorials on how to use the plugins!

Today, we’re featuring Waves EMI TG12345, a mixer plugin based on the legendary mixing console used by the Beatles and Pink Floyd. Waves Audio partnered with EMI to develop a Channel Strip plugin that is modeled on this famous desk. It is a favorite

The original EMI TG12345 was the mixing console designed by the British Music Company EMI for the world-famous Abbey Road Studios. Abbey Road is, of course, where The Beatles famously recorded. TG is an acronym for The Gramaphone Company if you’re wondering.

This iconic console was designed by EMI designer Mike Bachelor. It included a whopping 24 microphone inputs, coupled with 8 tape outputs.[1] The groundbreaking Sgt. Pepper album from the Beatles, recorded in 1967, could have used this number of inputs, but it was made just a few months too soon. In fact, the only Beatles album recorded on the first TG desk was Abbey Road.

It was used in the 70s at Abbey Road Studios and then donated to a school in Hampstead, North London. When the school was renovated, the console ended up in a dumpster. However, someone noticed it in the dumpster rescued it from the landfill. Moreover, it was restored with some spare parts from EMIs archives and it still lives on in the Waves plugin. Unbelievably, it’s the same desk that the plugin was modeled from![4]

To give you an idea of how big this mixing desk is, watch the video below.

Learn more and see some great photos of the vintage EMI TG12345 consoles at Music Tech.

In 2014, Waves released a 2 channel emulator of the EMI TG12345. Waves partnered with EMI and Abbey Road to create this channel strip plugin to mimic the sound of the compressor. There are 3 sections to the plugin, Dynamics, EQ, and Master[2].

Below, a short overview video of the plugin. 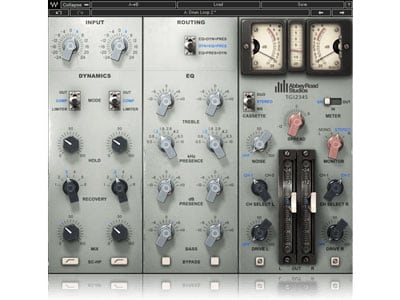 The original channel compressor/limiters in the TG12345 were fixed at 2:1 and 8:1 ratio to simulate the compression characteristics of the Altec/EMI RS124 and Fairchild 660 respectively, the two dynamics processors used heavily by the engineers at Abbey Road. The plug-in features the same 2:1 compressor ratio and a 7:1 for the limiter, and it has a fixed attack, selectable release settings, the Hold feature that was on the RS124, and the useful additions of a sidechain high-pass filter and a Mix knob for parallel processing. If you are familiar with the records that came out of Abbey Road in that era, you will know the sound of this compressor. Its classic squish is addictive and very fun.

How to Make Space in a Heavy Guitar Mix

Chris Lawson talks about how to create heavy crunch guitars to sit properly in the mix, while still allowing the vocals, drums, and bass to cut through? He uses EQ plus the EMI TG12345 channel strip plugin with its unique “Spread” feature.

This plugin captures every feature of the classic solid-state console from EMI which helped shape groundbreaking recordings by the Beatles and Pink Floyd. This tutorial is more Metalica than The Beatles!

The manual is a bit technical so this little video by Andrei Martinez Agras quickly explains it all.

Mixing engineer/educator Michael White gives you a detailed look at the features and controls of the Waves/Abbey Road EMI TG12345 plugin. He also shows what the plugin sounds like on vocals, guitar, drums and more.