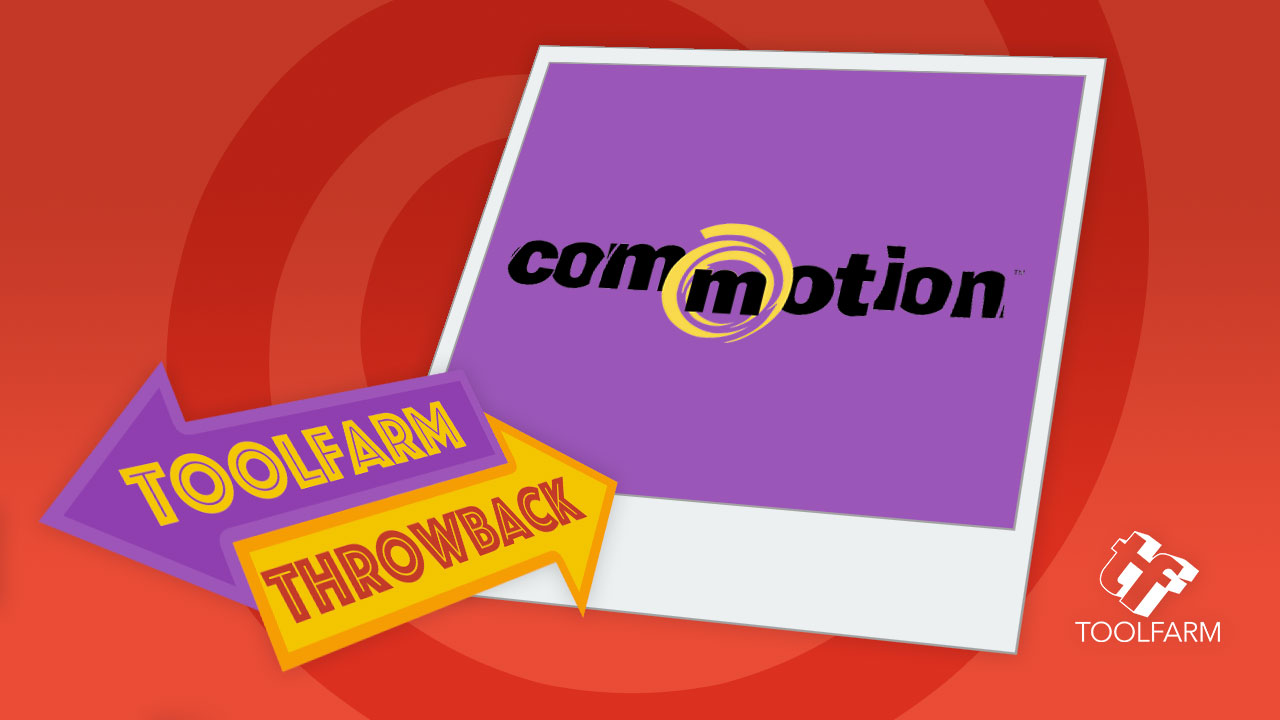 At times like these, it’s nice to reminisce about “The Good Old Days.” We thought it would be entertaining to revisit some software that is no longer in production. I’m talking about software that those of us who have been in the industry for a while remember fondly. These tools may no longer be around but the impact they made on the industry can still be seen in today’s tools.

First, we’re featuring Puffin Design/Pinnacle Systems’ Commotion. Commotion was a ground-breaking and beloved visual effects tool for rotoscoping and painting. Colin Sharp, Toolfarm’s Vice President, worked for Puffin, and then Pinnacle Systems when Commotion was at its peak. In fact, Colin was interviewed about Commotion 4.0 in 2002 by Video Guys. Below, we have that full interview, so be sure to scroll down and read it. Colin still has fond memories of the software. “It’s still the most intuitive and easiest to use roto software!”

Commotion was developed by Scott Squires, an Academy Award-winning VFX supervisor at Industrial Light & Magic. He released Commotion version 1.0 in 1997. It was distributed Puffin Designs, a company founded by Squires and Forest Key. It was often described as Photoshop for Video, as early versions worked frame by frame.

Commotion was a favorite rotoscoping application among VFX artists because of it’s revolutionary features. A big claim to fame is that it introduced rotosplines to the world. In addition, Commotion had features that are now common such as motion tracking and motion blur on masks. Animators loved the paint features and onion-skin features.

It was beloved by many or it’s one-of-a-kind features. Charles Roberts reviewed Commotion Pro at The Ken Stone Index:

Commotion is quite an application. It’s rare to find an application that offers superior functionality as well as an intuitive interface. After what seems like a lifetime of struggling with multiple software packages to get the compositing results that I want, its nice to know that one exists that combines all the most necessary functions with an ARTIST friendly workspace.

I remember this onion skin feature from a fun little job in which I painted a white bird yellow, frame by frame. I remember thinking how cool it was to watch the playback without having to render a QuickTime movie or dump it to tape.

In The Commotion About Puffin’s New Software, Max Sims writes:

You can set it to any frame rate or see it run as fast as possible. The frame rate can be set to Max, 24 fps, 25 fps or variable. It can be looped or set to rock back and forth. The area where you want to see the motion, such as only where a character is, can be selected and substantially improve the number of frames that can be loaded into RAM. RAM is just like money. You can never have too much and the more you have the easier your life is. This ability to see exact frame rates may be reason enough to purchase Commotion Player. The ability to work in an onion skin mode is especially helpful to see the ghosted previous frames to help out with timing issues.

Charles Roberts, who reviewed Commotion Pro at The Ken Stone Index was a big fan. “So, how would I rate this thing? You’ve got to be kidding me. I love it!!! It’s a ten out of ten, baby, and I am hard-pressed to find fault (with the Commotion Pro base application anyway). This is a really excellent and well-organized application.”

How much did Commotion cost?

Let’s just say that it wasn’t inexpensive. I found an old review from Mike Jittlov at NewMedia.com where he gives some comparisons of version 1.0 and talks about the price. If you were not in the industry 20 years ago, you need to know that prices have come down a lot on hardware and software. It used to be that only larger studios and post houses could afford visual effects and editing software and the hardware that they needed to run.

The interface is familiar, with paint and drawing tools like Adobe’s Photoshop and Illustrator, compositing tools like After Effects, and cloning tools resembling MetaCreations’ Painter. The big difference is Commotion’s instantaneous, real-time playback of once-unaffordable CGI miracles on a desktop Mac. Its two CD-ROMs, 193-page manual, and dongle weigh in at a hefty $2,495. But remember that same amount of money buys only two or three hours of cleanup time in a $1,000,000 Quantel or Flame edit suite. Commotion lets you work that same magic, and you keep the wand.

Puffin’s Commotion Pro 3.0 sold for $2,000 a license. The price went down for Pinnacle Systems Commotion 4 Pro sold for $799.95. Even if it’s extremely expensive by today’s standards, it was beloved. Commotion 4.0 even made the list of Top 10 software of 2001 at Videoguys, along with Boris FX, which is still available.

Where is Commotion now?

All good things must come to an end. In the year 2000, Pinnacle Systems acquired Commotion, and it was later acquired by Avid and was no longer developed.

From The Videoguys’ Insider Vol 1 Issue 2

In this issue of the Videoguys’ Insider, I talk with Colin Sharp the Manager of Software Sales at Pinnacle Systems about the latest version of Commotion – 4.0.

Videoguy: Good to see you again Colin, you’ve been involved with Commotion since before the acquisition of Puffin Designs by Pinnacle. When you first came on board with Pinnacle you gave me a great demonstration of Commotion DV and I instantly fell in love with it. Commotion was the first video compositing software that was easy enough for me to use and master. Now you’ve just released version 4.0 and it is even easier to use and much more powerful. You must be very excited, Commotion 4 is a killer upgrade. Give us a quick look at what’s new in 4

Colin: Faster, Better and More Powerful. Commotion 4 has been greatly improved over previous versions by becoming a faster product, and easier to use product with a new timeline interface and grouping controls as well as more powerful product bringing new features including Photoshop layer import and time-remapping functionalities

Videoguy: Can you give us some examples of just how much faster Commotion 4 is?

Colin: The compositing “engine” is up to 50% faster compared to previous versions while supporting much more complicated composites. The paint engine is now up to twice as fast as previous versions with superior edge softness. Commotion offers dozens of unique brushes as well. The new Timeline browser shows the whole composite at a glance. You can easily change the current view to look at the whole composite or single groups. This alone is a huge advancement increasing your overall work-flow.

Videoguy: WOW!! Those are some dramatic improvements in rendering times. When you combine these with the new grouping and browser controls Commotion just got a whole lot more productive. This next question is a bit more tricky, but we hear it all the time: What exactly is the difference between Commotion and Adobe After FX???

Colin: Commotion differs with After Effects in many ways and in many ways is similar. I like to think of Commotion as an indispensable tool for anyone working with video just like Photoshop is for any graphic designer. Commotion offers paint tools familiar to anyone who’s familiar with traditional image manipulation programs. It combines this powerful attribute with a timeline compositing interface.

I’ve included a screenshot from the movie, “Driven” which shows the wires that tugged the cars along for the crash scene. Pixel Magic used Commotion to paint and clone out these wires. The other is of the Commotion interface.

Videoguy: Thanx for clarifying this. I think we all now have a much better understanding of Commotion 4 and why we want it. Now for easier comparison. What exactly is in Commotion Pro and why do we want it? 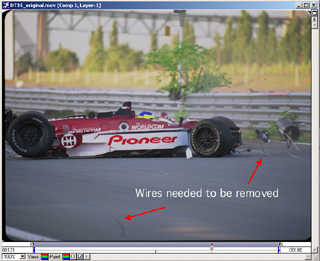 Commotion Pro’s motion tracker allows a user to select a spot within their footage with sub-pixel accuracy and track the movement of this spot. This can be really handy to either stabilize shaky footage or apply effects to objects. For example, you could apply your own logo to the side of a moving bus.

Primatte Keyer is probably one of the industries best keyer, especially good with DV footage, which tends to be difficult to manage. Shoot someone or something on a blue or green-screen and then use Primatte Keyer to quickly remove the blue/green enabling you to composite against a background. With the help of Composite Wizard to color match your foreground and background footage, expect to see some really realistic looking composites. To clarify color matching, imagine you’ve shot someone against a blue screen outdoors and you want to composite them against a scene that takes place indoors. Obviously, the lighting and overall color of these shots will differ dramatically. Composite Wizard allows you to color match the two shots to make them look more realistic. Very powerful and handy.

Videoguy: Thanx again. You’ve really helped us understand all that Commotion has to offer. As I mentioned at the beginning of this interview, you’ve come to Pinnacle with their purchase of Puffin designs in 1999. Well, it’s now 2 years later. Pinnacle has put together an incredible array of software titles in addition to Commotion. There’s Hollywood FX, TitleDeko Pro and Impressions DVD. Can you give us a look at the “Big Picture” with Pinnacle software groups.

Colin: Power attributes of each of these software products are becoming included in many of Pinnacles hardware products. An example would include a version of Impression bundled with both the DV500 and Pinnacle Pro-ONE. This type of integration brings more features to Pinnacle users. Additionally, discounted upgrades are typically offered to Pinnacle hardware owners of these powerful products.

Videoguy: I realize you’re in the software group, but I was wondering if you’ve had a chance to check out the new Pro-ONE. They’ve done an amazing job making Hollywood FX RT. To think that digital videographers can now get all of Hollywood FX 3D transitions w/ keyframing in real-time blows me away! When I saw the image stabilization feature it immediately made me think of the motion tracking feature in Commotion pro. Any chance that we’ll see some real-time commotion capabilities in future Pinnacle products?

Colin: Pinnacle Pro-ONE is an amazing product which incidentally leveraged part of Commotion to bring owners of Pro-ONE image stabilization. This feature is based on the same fastest, most accurate desktop motion tracker found in Commotion Pro. Real-time capabilities within Commotion and continued integration with Pinnacle hardware are definitely on the roadmap.

Videoguy: Cool!! Thanks a lot for taking the time to share with us all the great new stuff coming from the Pinnacle software group.

Colin: Thank you, I’m glad I could offer some useful information about Commotion. I’ve included a screenshot of the Commotion 4 GUI. I’ve highlighted some of the key functions/areas of the interface. As you can see, Commotion is very easy to use.

Colin: How about we offer the new Commotion 4 Pro for $799.95 or Commotion for $249.95 to anyone who reads this article!! (Note: this offer is from the original article. You can’t buy Commotion anymore. )

Videoguy: That sounds great! As an added bonus our customers who have a Pinnacle capture card can save an additional $50 and get Commotion 4 for $199.95!!

Thanks for taking a walk with us down memory lane today. As we’ve said, we plan to feature a few other software from the archives. I’m thinking Elastic Reality is next! If you have something you’d like for us to share, send us an email. Thanks!