An unrivaled arsenal of Visual Effects tools for Mac.

FxFactory includes scads of fabulous filters, elegant effects, and easy-to-use generators. What really makes FxFactory Pro unique though, is the option to design your own plug-ins to your specifications, customizing them to your needs for multiple hosts: Final Cut Pro, Motion, Premiere Pro, and After Effects…. all without knowing how to create a single line of code!

FxFactory powers a vast collection of visual and audio effects plugins for Final Cut Pro, Motion, Adobe After Effects and Adobe Premiere Pro. The FxFactory application offers an elegant and convenient way to browse our products.

Save your own presets to disc and recreate the same look later. In fact, you can use presets created in one host in all other supported hosts.

FxFactory Pro is the first visual effects package that lets you customize and create your own plug-ins for Final Cut Studio, Final Cut Express and Adobe After Effects without writing a single line of code.

In fact, the same powerful tools that allowed us to build FxFactory Pro plug-ins are available to you. In other words, create plug-ins that are specific to your projects, share them easily with other users.

FxFactory 7 brings benefits in performance and usability to our plugins in all video apps, with a special focus on Premiere Pro. As with all new versions of FxFactory, this is a free update.

Its high-precision rendering engine supports more than 8 bits per component. This guarantees the highest quality when effects are applied to digital media with film-like resolution and color fidelity.

Try It for Free

The trial version of FxFactory Pro is included with the free FxFactory installer. All effects will be yours to play with.

All recent versions of Premiere Pro provide GPU acceleration through the Mercury Playback Engine. Most recent graphics cards are supported, while a “Software Only” setting remains available as a fallback for those days when the graphics hardware seems not to be cooperating.

On the Mac, Premiere Pro currently supports GPU acceleration via OpenCL or Metal, two of the most widely adopted graphics technologies on the platform. To view and change the current Mercury Playback Engine setting, look under the File menu for the Project → General command:

GPU Acceleration options are available near the top of the Project Settings window, under the General → Video Rendering and Playback section:

OpenCL is the default setting on most configurations, as it currently provides the best balance between performance and compatibility with the widest variety of third-party products. If you are currently running macOS 10.12 Sierra, we recommend OpenCL as it happens to provide the best performance as well, i.e. the quickest renders.

FxFactory 7 supports GPU acceleration through Metal as well. Metal is Apple’s newest graphics technology, and if your system is running macOS 10.13 High Sierra and Premiere Pro CC 2018, Metal will give you the best performance. Unfortunately, few other third-parties outside FxFactory support Metal GPU acceleration in Premiere Pro, and you may have to factor those other plugins into your decision. No matter what tools you depend on, either OpenCL or Metal will provide a great boost to your workflow. While we observed a 5-10% advantage of Metal over OpenCL on macOS 10.13 High Sierra, both GPU acceleration options are up to 10x faster than “Software Only”.

Most of our products become GPU accelerated in Premiere Pro simply by upgrading to FxFactory 7, at no extra cost. Some will demonstrate a more dramatic jump in performance than others, such as our Wipology transitions.

Mercury Engine GPU acceleration is supported on Premiere Pro CC 2017 version 11.1 or later. We highly recommend Premiere Pro CC 2018 as it provides better performance, better compatibility with macOS 10.13 High Sierra, and is is a free update for all Creative Cloud users.

Mercury GPU acceleration in After Effects

The most recent version of After Effects has allowed third-parties to tap into the GPU accelerated pipeline provided by the Mercury Engine. All graphics cards shipped by Apple in recent years are supported. FxFactory enables additional GPU acceleration for our plugins via both OpenCL and Metal.

Mercury GPU acceleration is enabled by default in After Effects. To switch graphics technology, look under the File menu for the Project Settings command: 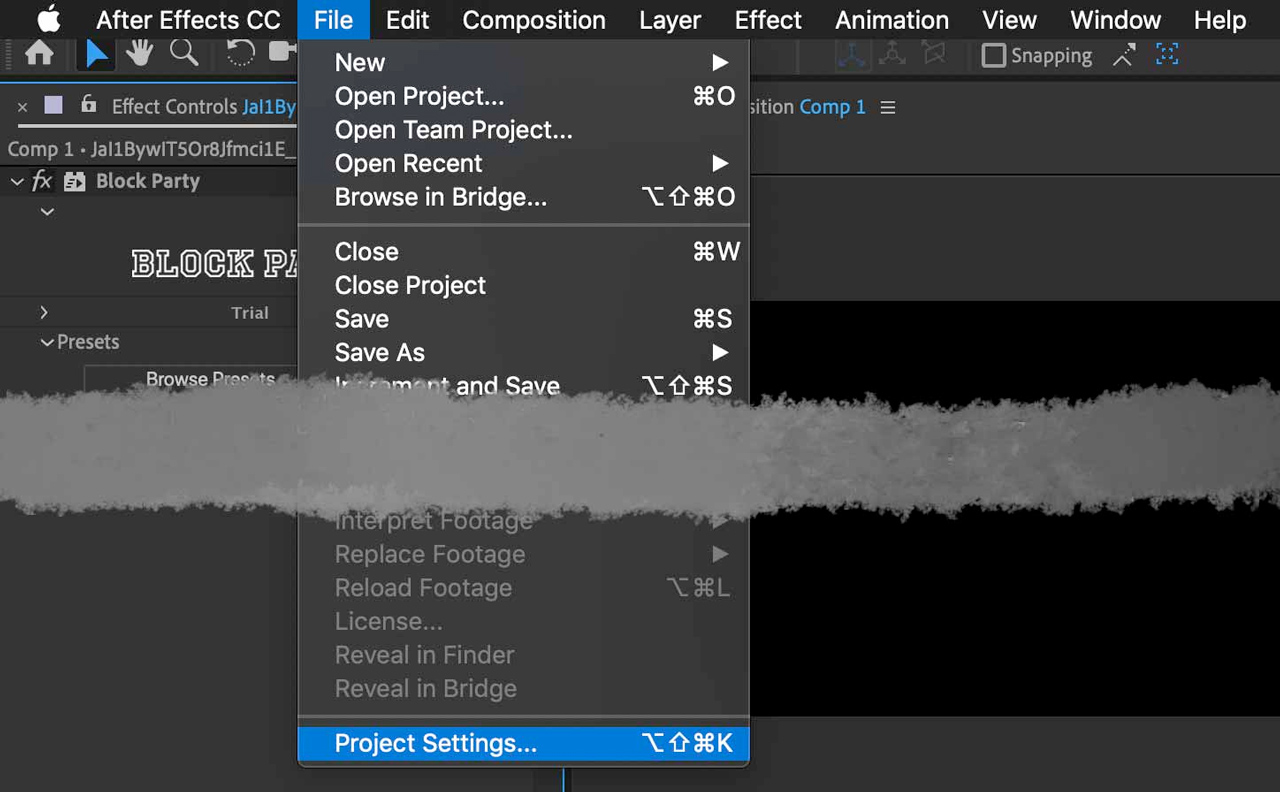 GPU options are the very first available in the Project Settings window, under Video Rendering and Effects:

Most of our products will take advantage of Mercury GPU acceleration in After Effects simply by upgrading to FxFactory 7.1, at no extra cost. After Effects CC 2019 version 16.0 or later is required.

Mercury Engine GPU acceleration is available through OpenCL and Metal in Premiere Pro version 11.1 or later and After Effects CC 2019 or later.

For older versions of FxFactory

5.00
2 reviews
100% of reviewers recommend this product
Please Note: This page is intended for product reviews. If you are having trouble with a product and require customer support, please Contact Us

It's a must have for Final Cut Pro

Seemingly limitless variety of effects. Works great in FCP and AE. Makes it easy to try out new products from other FXPlug vendors before purchasing.

Noise Industries is truly setting the bar in plug-in management and versatility. While there are other plug-in producers and certainly other excellent products, the level of quality displayed by NI and their development partners in the FX Factory plug-in management software is definitely making Noise Industries the one to beat. Having personally used NI and their development partners products for several years now, the most impressive thing to me is the level of dedication that they expend towards making their users' lives easier. This means help files, tutorials, explanations and product usability.

Combined with reasonable pricing, it’s tough to go wrong. I fully recommend downloading the demos and taking it out for a spin. The only problem you’ll have is trying to fully explore the bounty of excellence at your fingertips within the 15 day trial period.

FxFactory 7.1.1 This version delivers bug fixes and improvements for all users.

FxFactory 7.1 brings Mercury GPU acceleration and 32-bit float color support to our most popular plugins for After Effects.  Our effects render more than twice as fast in After Effects CC 2019. This free update improves performance in Final Cut Pro and Premiere Pro as well.

FxFactory 6.0.4 This version delivers bug fixes and improvements for all users.

FxFactory 6.0.3  This version delivers bug fixes and improvements for all users.

FxFactory 6.0.2  This version delivers bug fixes and improvements for all users.

This tutorial shows you how to use Stupid Raisins Story Pop to create whiteboard stories, explainer videos, presentations, animations, standalone graphics and much more.

Learn how to use Stupid Raisins Callout Pop's clean, simple, grunge, minimal and tech callout templates to draw attention to your video.

Learn how to reveal text, a drop zone, panels or all three by folding in 3D using idustrial revolution XEffects Folding Slideshow.

Watch this tutorial to learn how to use Stupid Raisins Motion Pop to make your media move with the 90 animated motion presets.  No keyframing required!

Watch this short tutorial to learn how to use FxFactory Shapes to create custom motion graphics with animated and stylized shapes.

This is a series of tutorials showing you how to use CrumplePop AudioDenoise AI to automatically remove hiss, background noise, and hum from your audio every host it supports.

In this tutorial you will learn how to bring your text to the next level with the 25 professionally designed- and -animated presets in PremiumVFX Animated Fonts.

Watch this tutorial to learn how to use PremiumVFX Trendy Titles to create full-screen, modern & trendy-style titles.

In this tutorial you will learn how to add realistic and subtle transitions with a shadow look to your FCPX projects with PremiumVFX Shadow Transitions.

Watch this tutorial to learn how to use PremiumVFX Mockup Presentations to showcase your app, game, website, social media profiles and more with 40 awesome templates.

Have you just purchased a license for a plug-in that uses the FxFactory engine? Here's how to download, install and register the plug-in.

Watch this tutorial to learn how to create transitions that break your video into panels and animate them to reveal the incoming clip using Panel Pop from Stupid Raisins.

This tutorial will show you how to use Polaric GetEVENT to create animated event templates in FCPX.  GetEVENT is part of the FxFamily of products.

Learn how to create animated instagram promos with this PremiumVFX Insta Promo tutorial.  Insta Promo is part of the FxFamily of products.

Learn the functionality of the Yanobox Nodes 3 Replicator, a powerful tool that creates instances of forms or scenes, connects graphics, and more.

Learn how to use Crumplepop Echoremover to remove echo and/or reverb from your audio, and achieve clean, professional-sounding results.

Watch this tutorial to learn how to use PremiumVFX Creative Portfolio to create beautiful professional portfolios with a modular design.

Learn how to use Cineflare HighLight Text to add pizzazz to your next video with animated highlighting topography.

Learn how to use the new Focus Point from Kingluma to create tilt-shift and other selective focus effects in Final Cut Pro.

Kinetic Text is a set of 20 gorgeous kinetic-styled titles that are quick to create and totally customizable with an easy to use interface! It comes with a very detailed video tutorial as well as some bonus effects. CineFlare CineTransitions 2.0 is also new. Both use the FxFactory FxEngine. This tutorial walks you through how to use it.

This tutorial shows you how to use customize the rip direction, rip angle, rip depth, and edge type using on screen controls and the Inspector, in XEffects Rips.

Learn how to use the new Animated Elements for FCPX from PremiumVFX to enhance your motion designs with animated shapes, with this getting started tutorial.

As you may know, Green Screen Made Easy, 2nd Edition, which I co-authored with Jeremy Hanke, came out in October 2016. In the book, I go over the keyers, but because it’s in print, I’m limited to how much space I have. In this series, I’m going IN DEPTH on some of my favorite keying and compositing tools for After Effects and other hosts.

The swish pan is known by many monikers: whip pan, roll pan, swipe pan, flick pan, zip pan, and whoosh are just a few. Get ready for some fun examples, instructions on how to create this cool transition, plug-ins to make the job fast and easy, and tips on improving your transitions.

If your greenscreen footage didn’t turn out as perfectly as you had hoped, here are some things that you can do to fix problems and not create new ones.

Noise Industries has so many awesome plugins and you aren’t too sure on how to install them then this tutorial is for you!

If you’re looking to add some visible camera shake or frame-to-frame jitter to your footage, there are a few different ways to achieve this effect.

In Depth: Noise and Grain Plug-ins for After Effects, Final Cut and Other NLEs, Part 2 of 2

Here is the rundown of noise and grain reduction plug-ins on the market for After Effects and other NLE’s, rated on speed, accuracy and quality, and ROI.