In Depth: Noise and Grain Plug-ins for After Effects, Final Cut and Other NLEs, Part 2 of 2

Here is the rundown of noise and grain reduction plug-ins on the market for After Effects and other NLE’s, rated on speed, accuracy, and quality, as well as return on investment. This article will focus mostly on grain and noise reduction but also touch upon matching and adding grain and noise. This is part 2 of 2.

See Part 1 of the Article

In Depth: Noise/Grain Plug-ins for After Effects, Final Cut and Other NLEs, Part 1:

This is part 2 of the article on Noise Reduction Plug-ins. In this article I’ll focus on GenArts Monsters GT M_RemGrain, GenArts Sapphire S_Grain Remove, Noise Industries FxFactory Noise Reduction, PHYX Cleaner FastNoiseReduction, RE:Vision Effects De:Noise, Red Giant Magic Bullet Denoiser II and a few others. These plug-ins work in several different hosts, so chances are, if you’re looking for a noise or grain removal tool, there’s something here for you!

After writing up the first article in this series, Indepth: Noise/Grain Plug-ins for After Effects, Final Cut and Other NLEs, Part 1, I realized that the thing that was tripping me up the most was the fact that I didn’t have decent footage to compare. Therefore for the second article, I decided to change things up a bit and use the same piece of footage for each, so that you can compare the result. I’ve even added new samples here to the plug-ins I have already covered (with the exception of Cinnafilm Dark Energy, which is Windows only). Now, each result will not match, but I was going for a similar look. Each tool works differently with different settings and different capabailites. That is my disclaimer!

C2 Gadget has been discontinued. 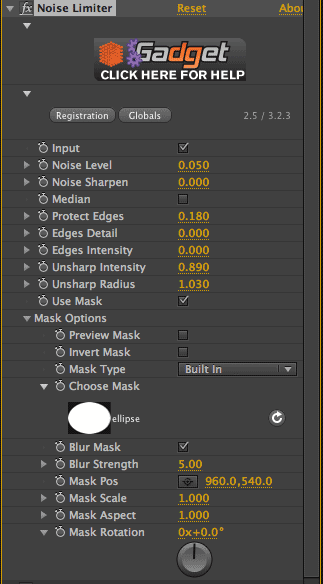 Note: CoreMelt is Mac only.

I’ve noticed that many CoreMelt plug-ins need to have the values set very low for a good result. This Noise Limiter plug-in is one of the more robust denoising plug-ins on the market with about a dozen options: Input checkbox, Noise Level, Noise Sharpen, Median checkbox, Protect Edges, Edge Detail, Edge Intensity, Unsharp Intensity and Unsharp Radius. One other option is the Use Mask checkbox, which opens some very robust masking options to isolate the area that you want to eliminate the noise.

So how did it work? Not too bad, but it’s quite a tedious dance that needs to be played between settings, as with many of these noise reduction plug-ins. I found that it looked a lot better when median was turned off. It seemed like it could not hone in on just the noise in the blue sky because there is no per channel noise reduction control. It works spatially, as there are no options to choose a reference frame. 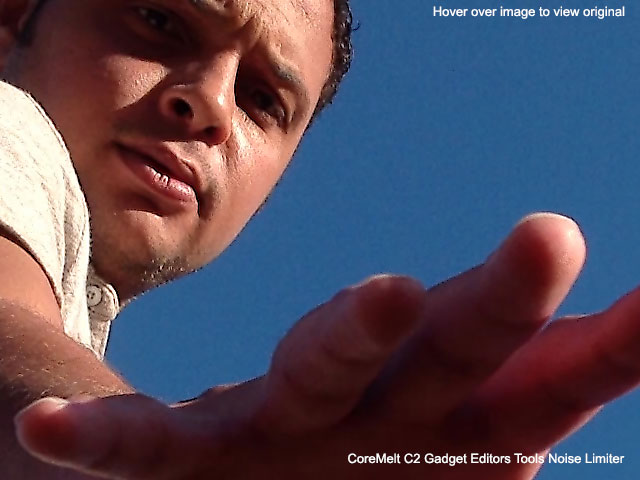 Monsters GT has been discontinued. 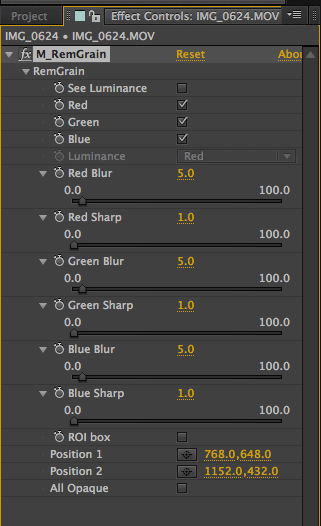 GenArts Monsters M_RemGrain does has the highly beneficial option of degraining per channel. The plug-in is a bit touchy. The sliders can’t seem to decide if they want to be not sensitive enough or too sensitive.  I had to crank up the values to about half way, around 40, for the degraining to take effect and then all of a sudden, the footage became really soft. For example, there appeared to be no difference setting the Green Blur from anywhere between 1 and 39, but at 40, the footage began to blur. At 40.5 it was too blurry. By combining the blur and sharpen settings though, I was able to get a good result. The plug-in is pretty fast.

Also, the plug-in really requires more features, such as being able to view the red, green or blue channels by themselves. When you choose only Red, Green or Blue with the checkboxes in the Effect Controls panel, you don’t just see the luminance of that channel, but the whole channel is tinted red, green or blue. I wonder if the plug-in works better on film footage than video footage. Hmm.

I only tested it in Adobe After Effects so I can’t speak about how well it works in other hosts. 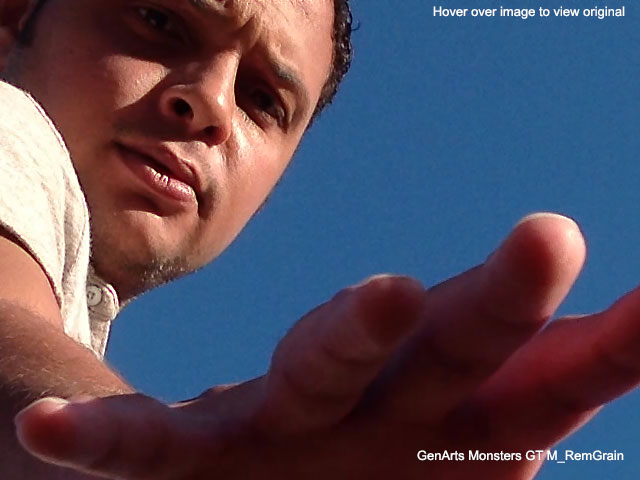 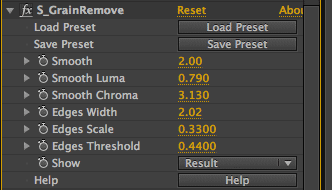 GenArts Sapphire GrainRemove  works quite differently from the Monsters M_RemGrain, with Smooth adjustments for Luma and Chroma, Edge Width, Edge Scale and Edge Threshold and an option to Show Result or Show Edges. As with most of the remove grain plug-ins, the default is way too strong at the defaults. Because the shot I am using has so much blue, smoothing the chroma more than the luma gave nice results. By keeping the values of all of the settings low, I was able to blur a good bit of the noise without losing a lot of the detail. Sapphire GrainRemove is one of the better tools on the market, in my opinion, especially due to it’s speed. 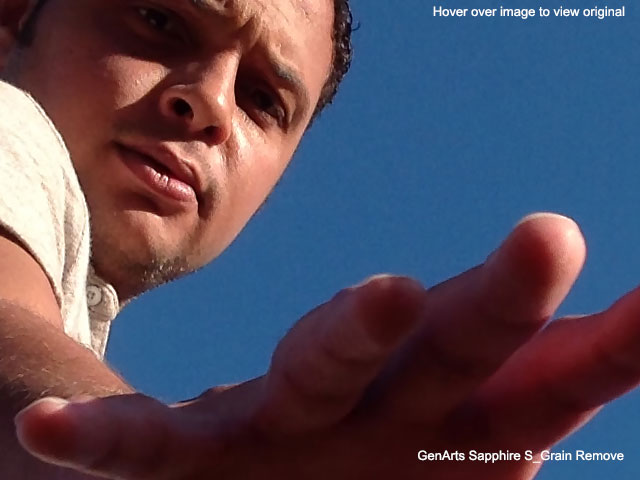 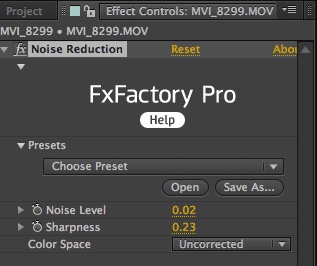 Note: FxFactory is Mac only.

As much as I love the FxFactory Pro package, the Noise Reduction tool couldn’t do the job well enough on several pieces of footage that I tried. There are just not many options: Noise Level, Sharpness and Color Space. Colorspace gives you a pulldown menu for Linear or Uncorrected. There is a single preset called Noisiest of All, which really blured the detail of any footage I tried. The values for Noise Level have to be kept extremely low (0.05!) or details begin to blur. On highly detailed footage, I even got some strange artifacting and pixelization on the edges of detail. The control for Sharpness caused strange edge effects on contrasting areas in that same footage. There is no per channel control.

I hate to pan this single filter, but I’ve had terrible results with it with some footage. The example below, however, did not turn out so bad. Highly detailed footage, like water with reflected trees was quite a problem. I ended up getting a bunch of artifacting after applying the filter, especially if I boosted the values. I am guessing it may have something to do with not having any options about where to sample noise from. The results don’t look like a temporal filter, so I’m thinking it works spacially, frame to frame.

I’m a huge fan of this package and it’s full of wonderful plug-ins. Don’t let this one poor review sway you from trying out FxFactory Pro! 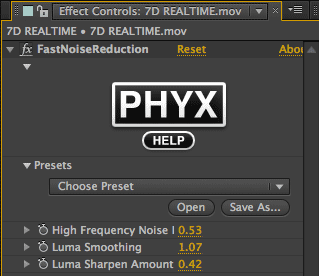 Note: PHYX Cleaner is Mac only.

There are not a many options with FastNoiseReduction and is no degrain per channel options, but the plug-in is very fast and the results are decent. Options include High Frequency Noise Removal, Luma Smoothing and Luma Sharpening Amount. The values must be kept low or the footage will blur like crazy. The default settings are too high, in my opinion, but the plug-in does a rather nice job between Luma Smoothing and Luma Sharpen Amount. You just need to get the balance right. A light touch is key. De:Noise contains two plug-ins, DE:Noise and DE:Noise Frame Average.  DE:Noise does not have the option of per channel degraining but is still more robust than many other denoising plug-ins on the market. De:Noise has a Pre-Process Control for adjusting the contrast, then allow you to choose the Temporal Process Mode (Median, Average, Motion weighted average, min, max and more). The values can be adjusted for Spatial Radius and Threshold %. There are several other options, like using an ALT Track Source and Post Processing Controls. The DE:Noise Frame Average did a pretty nice job with removing the noise and keeping the detail.

Used subtly, DE:Noise did a nice job removing noise and keeping detail, and in my opinion, works better than most other plug-ins. As with the other plug-ins, you will soften the detail in the noise removal process. Key Corrector has been discontinued.

Red Giant Key Correct is one of those indispensable tools in my arsenal. No matter what keyer I choose, Red Giant Key Correct will help my key come out better. It has options for smoothing the greenscreen, filling holes, and since it’s featured here, I bet you guessed it has a denoiser.
Red Giant Key Correct KC Denoiser is a pretty simple tool that works temporally and allows the user to choose the Time Depth (how many frames you want to sample before and after each frame, to create an average), the Average Range, and Blend with Original.
With so few features I didn’t have high hopes for Key Correct Denoiser, however I was surprised at how well it worked with very low settings on the parameters. 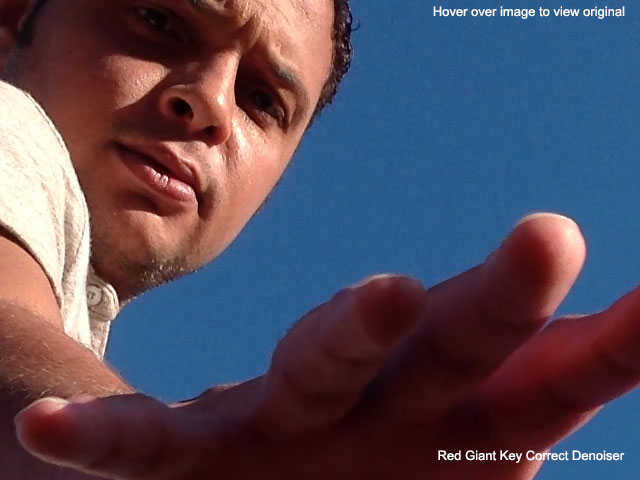 Denoiser is only available as part of the Magic Bullet Suite.   Download Demo Red Giant Magic Bullet Denoiser II was quite a nice upgrade and has many more options than the previous release. It works both temporally and spatially and has options for fine tuning the smoothing. I actually thought the results were better when I switched the footage source from Video to Film, even though the footage was never film. By keeping the values low, which seems to be the mantra for most of the noise removal tools, I was able to get some really nice results, keeping most of the detail and blurring the noise just a bit. 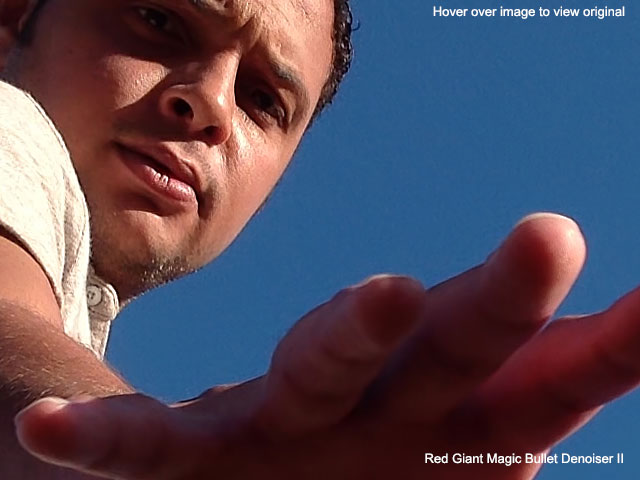 Note: Tiffen products are no longer available at Toolfarm.

This one is about as bare bones as you can get, with the only options of Amount and Force 16-bit processing. Clicking the Dfx Interface doesn’t give more options, just presets with the Amount set to 5, 10, 15, 20 and 25. With this plug-in, I had nice results with the value set to 4. Less than 4 had not much effect. After about 7, the details started to blur too much. Not a bad result but lacking many options I love in a denoiser. The full Tiffen Dfx Film/Video package is really nice and I can see how denoising would take a back seat to the gels and color effects. If you have it, I’d definitely give it a try but the package is not worth buying for just the DeNoise filter. It’s totally worth it for the great looks you can give your footage though. 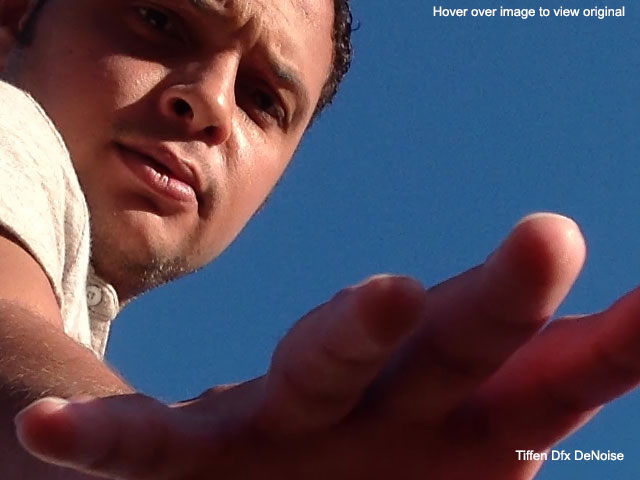