Toolfarm, since 1999, is the leading third-party reseller of After Effects Plugins and visual effects tools. Known as the one-stop-shop for the best professional visual effects, motion graphics and plugin tools.

On April 20, 2020, Toolfarm acquired the assets of AV3 Software Inc. to expand its sales presence in Europe. (Press release). Heather Sutton joined the Toolfarm team in 2018. As Customer Success Manager, she focuses on cultivating relationships with Toolfarm’s clients as well as its value-added resellers. Introducing new product lines, sharing product update information, and assisting in managing subscriptions and maintenance agreements are just a few of the tasks she helps with at Toolfarm.

Heather has over 16 years of experience in sales, product management, and support roles. She worked for EditShare for over 6 years as Inside Sales Manager and Channel Development Manager. Prior to EditShare, she worked for Contour Design for 10 years, wearing many hats and finally ending the decade as Product Manager for Contour Design’s ShuttlePRO jog/shuttle device. Micah Sharp joined Toolfarm in 2016 to manage Toolfarm’s engineering processes.  A software engineer by heart, Micah spent over a decade at Red Giant Software first as their Director of Engineering, then as their General Manager and Vice President.  Micah’s career started at Puffin Designs, working on the famed rotoscoping software Commotion.

Raised in Tokyo, Japan, he then spent several years in San Francisco in the 90s. Then onto Eugene, OR, where he currently resides with his wife and 2 children.  As a dedicated guitarist, he plays gigs in the local Eugene scene with his band, “The Dad Bandits”. Tim joined Toolfarm in 2015 assisting Colin and Johnny with sales and later began managing all Chaos Group related activity as well as providing help for Brian in operations.  Always on the clock, Tim tirelessly works to get Toolfarm’s clients the tools they need in the time they need.

Tim enjoys skateboarding and other outdoor activities. Tim is originally from Massachusetts and currently lives in Portland, Oregon. Rich D’Angelo joined Toolfarm in 2015 as Director of Business Development, before moving into the role of CEO. Rich orchestrates the Toolfarm team, while working with Toolfarm’s vendors, reseller channel partners, and major clients to ensure that Toolfarm delivers maximum value and service. Prior to Toolfarm, Rich served as Vice President of Sales and Marketing at EditShare, and Director of Worldwide Sales at Boris FX. Rich’s career started at Number Nine Visual Technology, the maker of the world’s first 128-bit graphics processor.

Originally from Pittsburgh, Rich lived in Boston for many years, where he earned an MBA at Northeastern University, and now lives in Philadelphia with his wife and son. He is a lifelong, long-suffering Philadelphia 76ers fan. Prior to Toolfarm, she worked at a local TV studio teaching herself Avid Media Composer, then moved on to Postworks for about 9 years, editing commercials, corporate and training videos, and teaching herself Final Cut Pro. She was also a Freelance editor for 5 years. She has a BAA in Broadcast and Cinematic Arts from Central Michigan University. She lives in Grand Rapids with her husband and two sons. 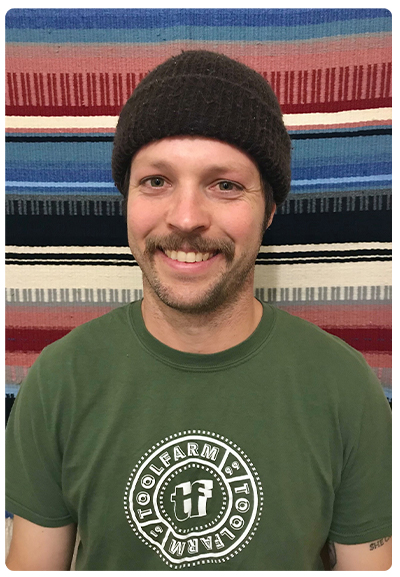 Johnny joined Toolfarm in 2009 working part-time in sales, getting to know the ins and outs of Toolfarm and the motion graphics industry. Quickly adapting to the fast paced needs of Toolfarm’s clients, Johnny’s customer service and sales retention has made him a well known name and go to man for software solutions.

Before joining Toolfarm, as an established skateboarder himself, Johnny was working at Unheard Skateboard Distribution promoting the brands he rode for, specifically Bacon Skateboards and Fixer Skateboards.  Rumor has it, he’ll still slap a quick grind if asked!

Johnny lives in Portland Oregon with his wife Alicia, and their son, Rex. Joining in 2008, Brian began helping with demo downloads until moving into purchasing in early 2011. Educated in graphic and multimedia design, he finds himself enjoying the technical and post-production realization just as much as the design process. Never a dull moment in purchasing, Brian juggles time sensitive nature of delivering software and routing the proper post sales customer service.

When not helping customers with the means to realize their own projects, Brian enjoys skateboarding and seeing as many concerts as possible. Brian lives in Portland, OR Shizue joined as Toolfarm’s Finance Manager in 2008 to organize and protect the company’s monetary efficiencies. Previous to Toolfarm, Shizue spent 10 years working for the law firm Pillsbury Winthrop Shaw Pittman in San Francisco.  Shizue’s attention to detail has been vital in keeping Toolfarm’s books and finances in immaculate condition, and has ensured the company be known as a reliable business partner.

Shizue has 2 cats, Slim and Gizmo, and lives in sunny Honolulu. Alicia manages the marketing and design/content development team at Toolfarm.

She joined Toolfarm after 5 years at the digital motion picture and post-production company Postworks, where she developed motion graphics, print and web content. She has worked with After Effects for more than 2 decades, with a more recent focus on 3D and CINEMA 4D. She has a BFA from Grand Valley State University in Film and Video, with a background in Fine Art. She lives in Grand Rapids with her partner Thomas, 2 cats, and a potbellied pig. Michele Terpstra is the Director of Digital Content for Toolfarm.

Before Toolfarm, Michele started at Postworks as a motion graphics artist. She also taught After Effects and Photoshop at Kendall College of Art & Design. Michele has a BA from Grand Valley State University Film/Video Major and is currently serving on the executive board of her alumni chapter.

She lives in Grand Rapids, MI, with her husband, Dan, and her lovely daughter, Lily. She recently finished a plant-based cooking course. Colin Sharp began as VP of Sales for Toolfarm in 2003, joining Jason in refocusing the company on video software with attention to plugins. Prior to Toolfarm, Colin worked as the Director of Educational Sales at Pinnacle Systems, and as Director of Sales for Puffin Designs, the makers of Commotion.

Colin’s career began with Jason at Terran Interactive, helping establish their flagship product, Media Cleaner, as the industry’s standard for multimedia compression which was acquired by Media 100 in May of 1999.

Colin also co-owns and helps operate Unheard Skateboard Distribution based in Portland, OR. Jason Sharp took over as President and CEO of Toolfarm in 2003, and refocused the company on video software with attention to plugins. Prior to Toolfarm, Jason worked as the Business Development Manager at Boris FX, and as Director of Sales at Synthetik Software, which focused on natural digital media generation in both video and still imagery. Jason’s career started at Terran Interactive, helping establish their flagship product, Media Cleaner, as the industry’s standard for multimedia compression, which was acquired by Media 100 in May of 1999. This introduction into multimedia propelled his interest into the world of editing and visual effects, then naturally After Effects, after being given a free copy of Adobe’s After Effects 4.0 – Classroom in a Book.

Jason was born in Hong Kong, grew up in Tokyo, and now lives in San Francisco with his wife, Patty, 3 children, a dog and cat. He owns a kegerator.