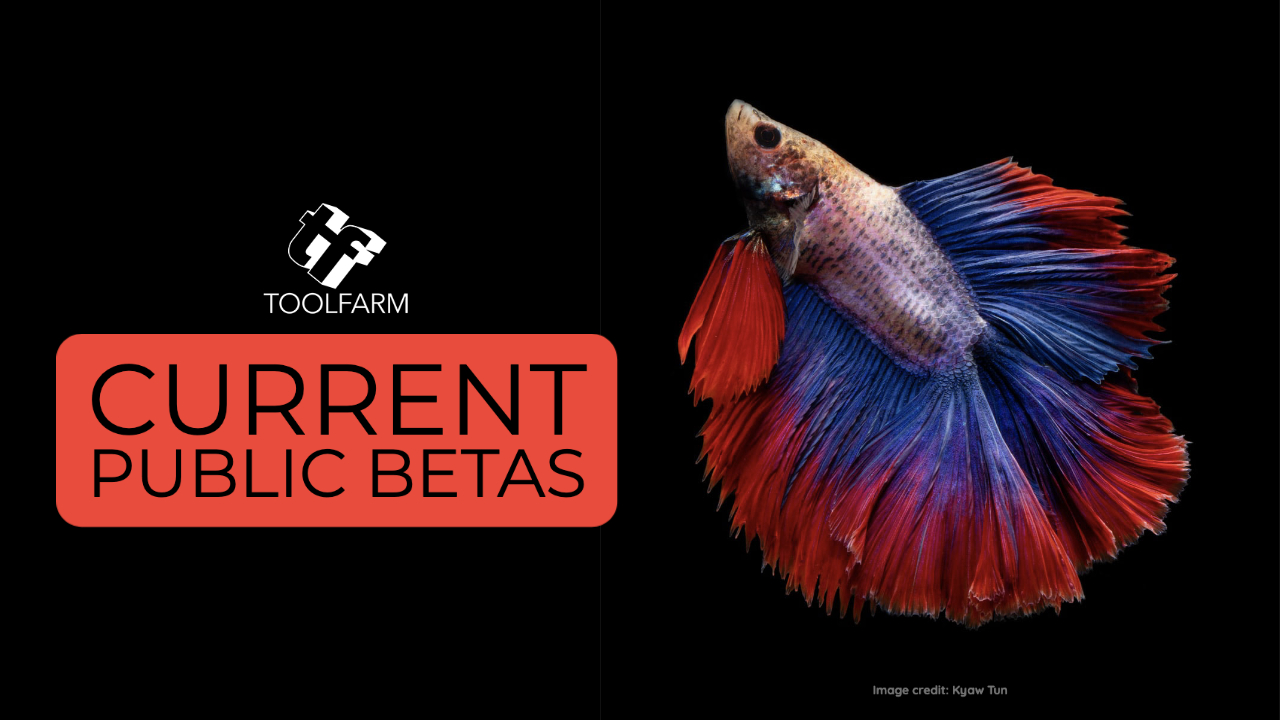 Of course, we’ll keep this page updated with current public beta information. If you hear about something and we don’t have it listed, or if you know if a beta has ended, please drop us an email and let us know.

To be clear, some of the betas here are public while others require that you have a current license.

Because of the holidays, there have not been a lot of new betas available but we’ve heard about new ones that we’ve added below.

Bookmark this page! We updated it often.

How to be a valuable beta tester

Instabug has some great advice on how to give the best feedback and maximize your time while being a beta tester.

Obviously, you should know the product and what bugs have already been reported, but the article also touches on how to submit a quality bug report and suggests usability changes. If you’re a private beta tester, you should always keep your beta testing confidential too.

The Description: Reactions is a toolkit for physically-based animation built for Visual Effects and Motion Graphics artists and technical directors. It is the evolution of TurbulenceFD that advances versatility, performance, and workflows. Reactions include tools for volumes (like fire, smoke, or clouds), particles, and procedural SDFs. But it allows for substantial extensibility of its framework that also handles polygon meshes and curves. Both built-in and user-created extensions use GPU and CPU hardware.

Reactions includes ready-made, dynamic assets and allows artists to create their own to re-use and compartmentalize their work.

Note: New purchases of TurbulenceFD licenses include a free upgrade to Reactions.

NVIDIA Omniverse is no longer in beta but I’m sharing it here because it was officially released but is still available for free for individuals.

New in the After Effects Beta

The December 2021 release adds a New Properties Panel in After Effects, as well as an Extended Viewport for working in Draft 3D.

This was new from Adobe in the October 2021 release.”Adobe extends Photoshop to the web for sharing, reviewing, and light editing of Photoshop cloud documents (.psdc). Collaborators can open and view your work in the browser, provide feedback, and make basic edits without downloading the app.”

To launch Photoshop on Web, you must have an active Adobe Creative Cloud account.

There are several betas running concurrently at Digital Anarchy. Help them out by testing these products.

The Flicker Free 2.0 BETA is finally here for Resolve! This is a fully enabled demo of the plugin for Resolve and other OpenFX host apps.

This may not be fully compatible with all OpenFX hosts apps at this time. It’s been tested and should work with Resolve. Please try the demo in other host apps before purchasing.

AfterCodecs Exporter plugin suite for Adobe CC (After Effects, Premiere Pro, and Media Encoder) features “new codecs, new containers, new metadata, and new workflow options. Some codecs are faster or provide better quality. There are already some articles to help you with export with AfterCodecs on our website if you need more information”

SketchUp for iPad (Beta) has arrived! This combination of SketchUp and iPad gives you the ability to design on-site, on the go, and even on the couch. You can now join the beta group to test out new features and give your feedback.

Get the Beta
Cinema Grade

To put it simply, 3dCoat has an ongoing beta for license holders.

Datasmith Plugin for form·Z for Use in UE4 & Twinmotion

The Datasmith Plugin for form·Z lets you convert your 3D model for use in Unreal Engine 4 and Twinmotion. This is a beta, or “technology preview” so use it as you would beta software.

Beta Version: finalRender for Maya 2018
Release Date: May 2018 (apparently, this one is still going on.)
Beta Type: Open