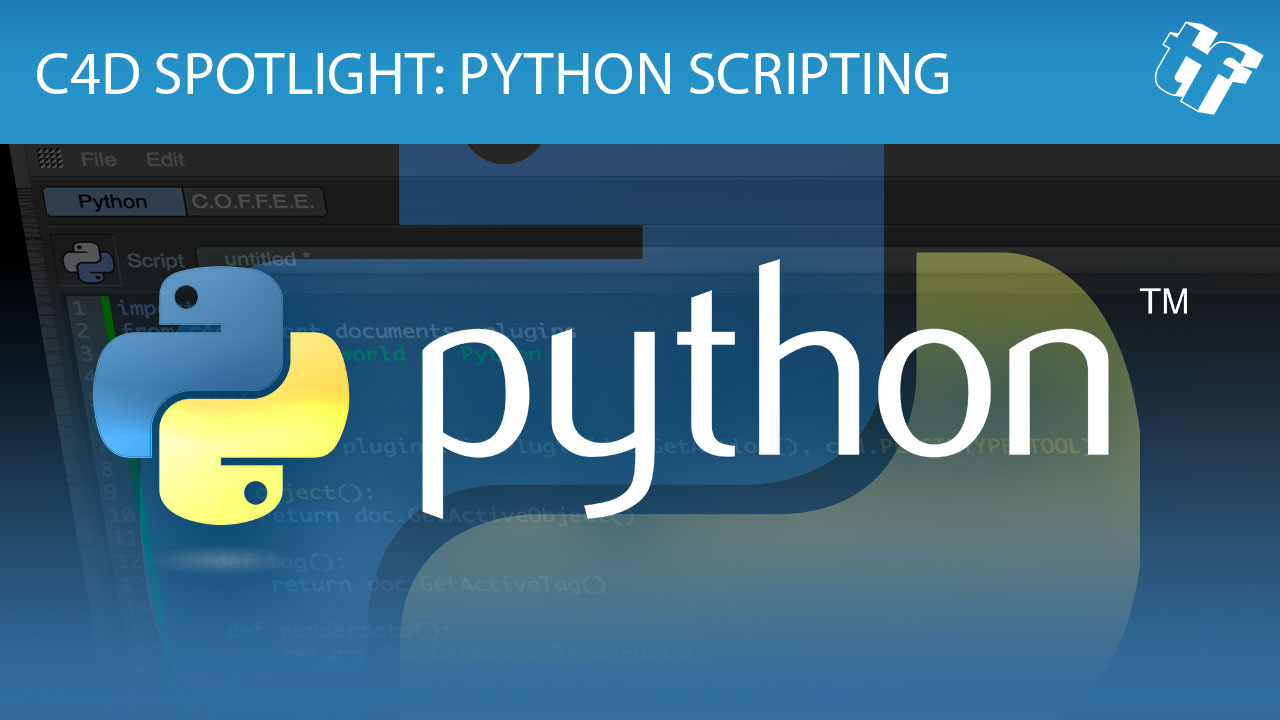 Okay, I know what you’re thinking. Learning Python will be difficult and I don’t have time. Well, learning just a bit, enough to be dangerous, can expand what you do in Cinema 4D and automate repetitive tasks to speed up your workflow. I promise that I will not get technical in this post. This is an overview of Python, why you might want to learn Python as a Cinema 4D user, and where you can learn Python for free. And, of course, a bunch of tutorials and free Python scripts!

This is an older article that we decided to update because Python 3.10 will be out soon. The beta 3.10b went up today, May 21, 2021. The current version information is below in the blue box. Anything that is new is labeled with a New badge.

Python is an easy-to-learn, powerful, high-level programming language that useful for creating tools, plug-ins, or scripting for 3D applications, games, After Effects, and more. High-level refers to the fact that it’s made to be easy for humans to read and write, so that should give you some idea about it. It’s also well-integrated into Cinema 4D: as a Mograph Effector, as a script, a tag, an Xpresso node, and more.

Yep, that one gets the big blue button because it’s important! Be sure to bookmark that page.

Download the project file (link in the video description)

Python is great because it

In this post, we’re focusing on what you can quickly do with Python in Cinema 4D. Python can help you with repetitive tasks; creating geometry, splines, and extrusions; use it with plug-ins like TurbulenceFD. There are some tutorials to get you started, with a couple of more complex ones, so that you have an idea of what you can do with Python in Cinema 4D. There are also a lot of scripts you can download and run for yourself. Note: Python is not included in Cinema 4D Lite.

Fun fact: Did you know that Python is the second scripting language for Cinema 4D (C.O.F.F.E.E. is the first).

With most of the scripts and tutorials below, you don’t need to know a lot about Python but check out Resources to Learn Python for places you can learn for free or at a low cost.

New Check out LearnPython.org for a free Intro tutorial on Python.

New Jobtensor has a nice introduction to Python. Check it out.
This is what the Python Effector Parameters look like. 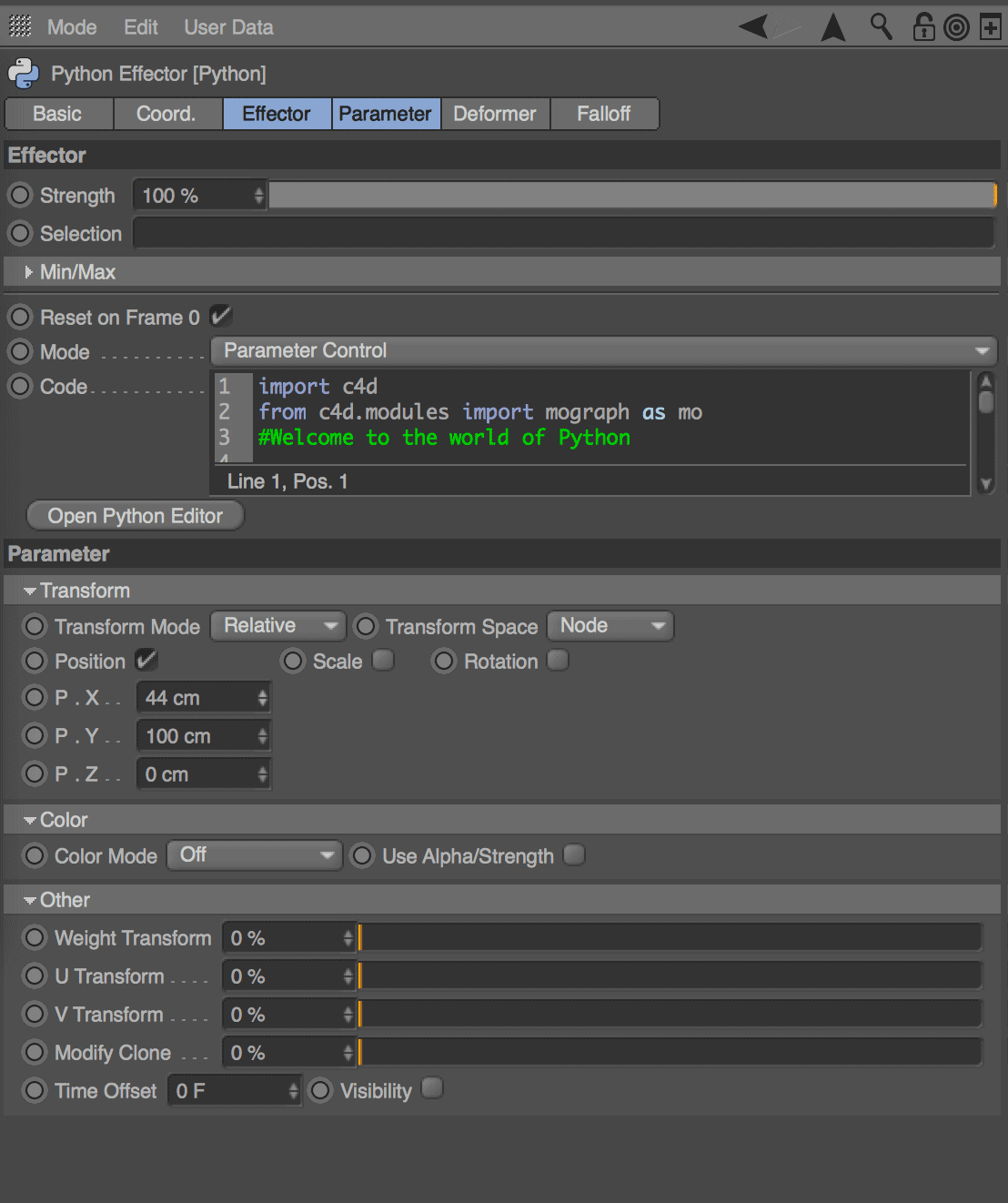 Below is the Cinema 4D Script Menu, where you’ll access the Python Generator, Script Log, Script Manager, and more. Get familiar with this menu. 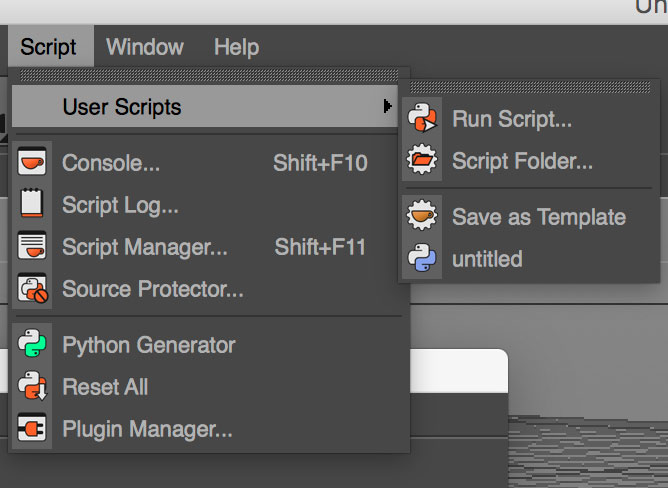 Maxon Labs – MAXON Labs is a new way to bring Cinema 4D’s latest innovations or useful tools from MAXON’s R&D team directly to you.  This is new this month and there are only a few scripts up there now.

Jack Bransfield from Chicago C4D helps Cinema 4D users wrap their heads around the basics of Python in Cinema 4D.

Jack from Chicago C4D teaches you how Python and Cinema 4D communicate.

New 5 Lines of Python every C4D User Should Know

Alpha Pixel walks you through some useful snippets of code.

Noah Witchell explains how to easily use Python scripts in Cinema 4D to get going fast. This is not a tutorial on how Python interfaces with Cinema 4D or how to program Python, so it’s incredibly useful. He talks about the Script Log in Cinema 4D.

He uses scripts in the video (download link in video description)

Creating Geometry With Python In C4D

Manuel from Entagma explains how to create a cool Plexus-inspired wireframe in Cinema 4D with Thinking Particles and Python. This is a more advanced level tutorial but easy to follow and it shows what cool things you can do with Python in Cinema 4D.

Simon Holmedal has integrated XPresso/Python into his daily workflow. In this video, he shows some really incredible examples (Nike Mercurial for World Cup and a personal project) where scripting has helped him in his production work. He explains how he uses scripting and MoGraph concurrently.

Mike Udin shows you how to create multiple contours of the splines with additional effects. The tutorial is in Russian but you should be able to follow along visually. Download the script here.

Curious Animal as several scripts with instructions on their blog. Some may be for older versions of Cinema 4D, but I would imagine that they still work.

Tutorial/Freebie: ShuffleArray Effector for CINEMA 4D
Douwe shares his new simple MoGraph Python Effector script, as well as a tutorial on how to use the script.

Freebie: Smart Stairs for C4D
Smart Stairs is a Python-based, parametric stair generator for CINEMA 4D from The Pixel Lab.

If you want to take this further and really learn Python, perhaps to build your own plug-ins and software, here are some resources. You can learn Python from paid training services like Plural Sight or Lynda.com but there are also some free courses from universities that may interest you.

Cinema 4D Python SDK Documentation – This is useful if you want to build plug-ins for Cinema 4D.

CS For All: Introduction to Computer Science and Python Programming
Harvey Mudd College via edX

Python for Everybody — Exploring Information
via Independent