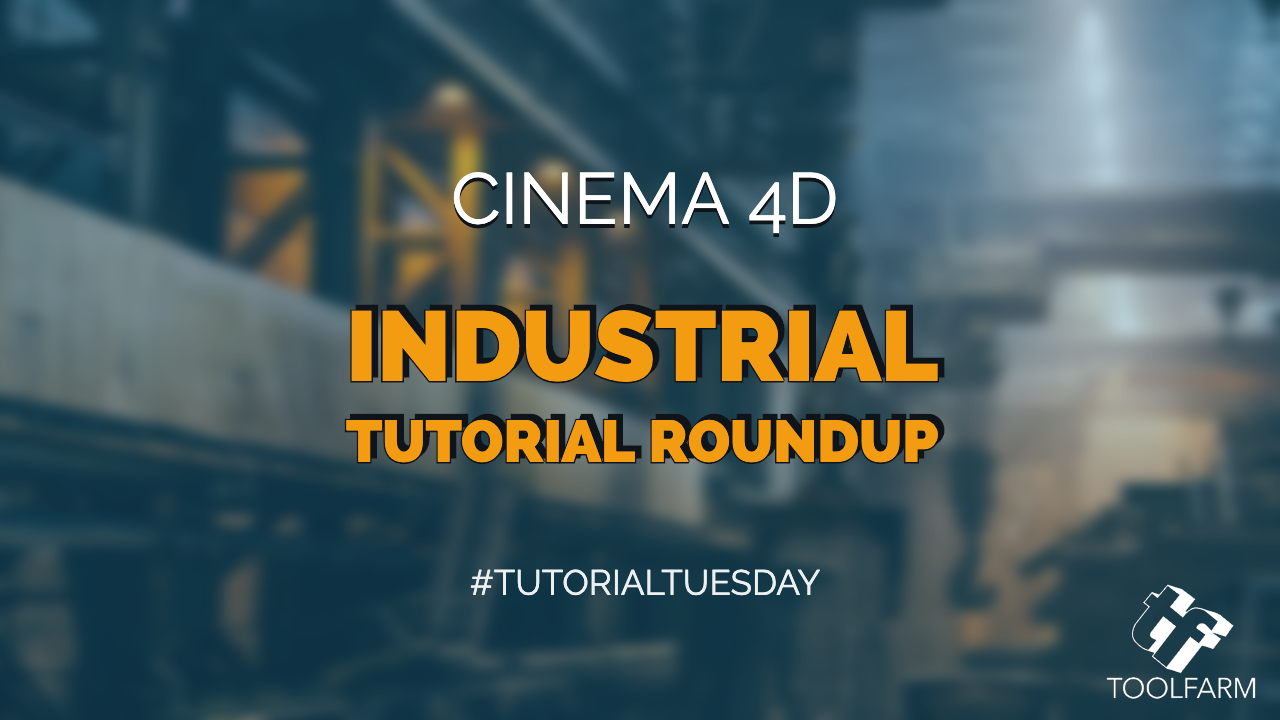 It’s Cinema 4D day at Toolfarm so here is a Cinema 4D Industrial Tutorial Roundup in honor of the Maxon Flash Sale, which ends at Midnight PDT tonight (May 7, 2019).  Today we’re focusing on tutorials for modeling, rigging, and texturing for things like car parts, tool parts, machine parts, and more.

And, we’re not talking about the strange winter Olympics sport here! First, Glen Johnson shows you how to model knurling in Cinema 4D. According to Wikipedia, “Knurling is a manufacturing process, typically conducted on a lathe, whereby a pattern of straight, angled or crossed lines is rolled into the material.” For example, it is the bumps on your ratchet or industrial rollers. Who knew? Not I.

Glen Johnson again shows you how to create a nut in this hard surface modeling tutorial. He focuses on technical objects so he has some useful techniques to share. Via HelloLuxx.

Aleksey Voznesenski of Ace5Studios explains how to set up and rig a hydraulic piston in Cinema 4D. The candy coloring is nice but optional.

Finally, Nick from Greyscalegorilla shows you a technique to put a nice metal texture on some cabling.

Offer unprecedented content creation possibilities to the procedural animation toolset in MoGraph. The Fields feature in Cinema 4D R20 makes it possible to efficiently control the strength of the effect using any combination of falloffs – from simple geometric shapes to shaders and sounds to objects and mathematical formulas. In addition, mix and combine fields with one another in a layer list. Remap and group effects in multiple Fields to control Effectors, Deformers, weights and more.

The OpenVDB-based Volume Builder and Mesher in Cinema 4D R20 offer an entirely new procedural modeling workflow. Combine any primitive or polygon object (including the new Fields objects) to create complex objects using Boolean operations. Volumes created in R20 can be exported sequentially in OpenVDB format and can be used in any application or render engine that supports OpenVDB.

More than 150 different node-based shaders offer customers a new and streamlined workflow to quickly and conveniently create shading effects from simple reference materials to highly complex shaders. Get started with the new node-based workflow with the existing standard material system’s interface. Node-based materials can be made available as parametric assets with a reduced interface.

The modernization efforts of the Cinema 4D core architecture and foundational technologies MAXON announced in 2017 are now more tangible and mature in Release 20. See it in the series of significant API adaptations, the new node system, and the modeling and UI framework.