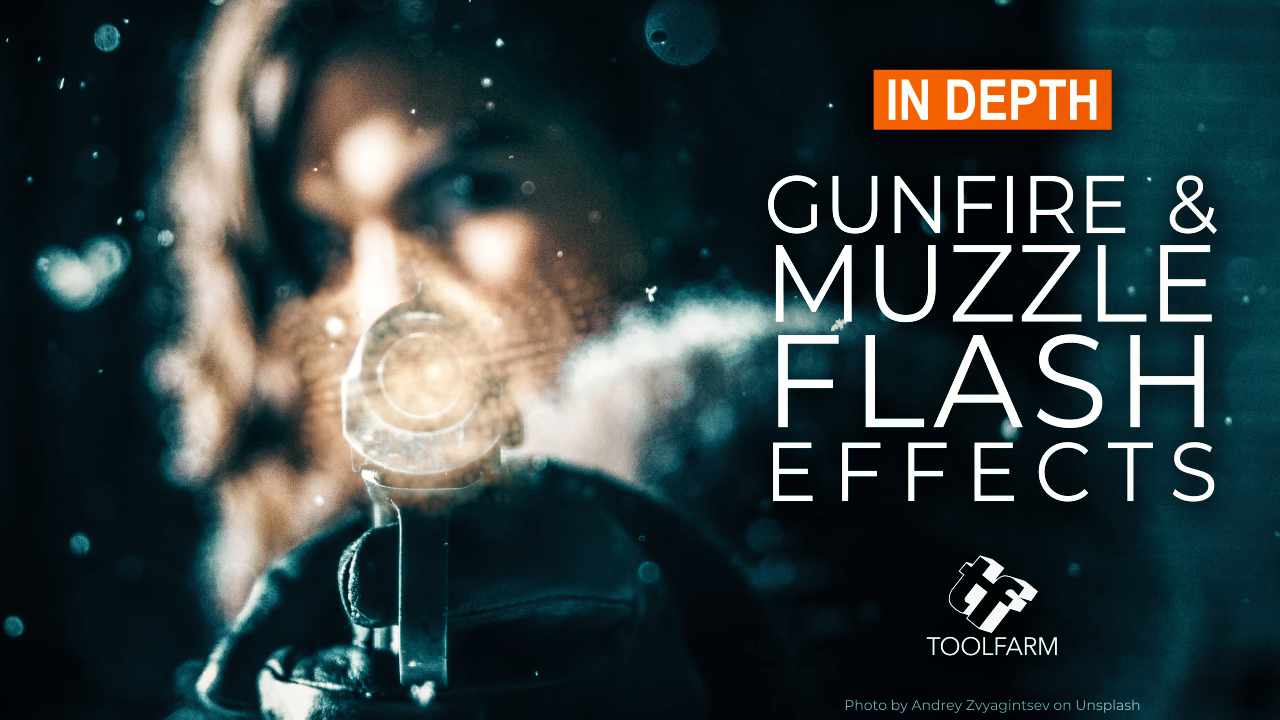 Part 1 covers Real vs. Movie Effects. By paying special attention to what a gunshot looks like in reality, you can craft more believable effects. Think of it as an exercise in taking a close look at something that happens so fast that your brain can’t keep up. By slowing down and breaking down how it looks in real life and focusing on the individual elements, you’ll be able to recreate that reality in your filmmaking. Sure, you can use an out-of-the-box effect, but getting the physics of ballistics accurate is the bullseye to hit! That said, you can always amp things up for drama.

In part two, we’ll go over plugins and tools to help you recreate some of the effects, with tutorials interspersed throughout. In future articles, you’ll learn about where to find 3D models and stock elements for your gunfight scenes. Then, in the last article, we’ll focus on the all-important sound design for your gunfight scene.

In any action film or video game, the sound is as important as the visuals. In this article, we’ll focus specifically on Gunfire and Weapon Sound Effects. We’ll feature some tools to help you create your sound design, resources for sound effects, a few tutorials, and perhaps, a couple of freebies.

In this video from Corridor Crew, a group of VFX Artists who run a production studio, learn what Hollywood commonly gets wrong in films. This video encapsulates the purpose of this article, to help you get your gunfights right. This video makes for the perfect introduction.

A Breakdown of Gunfire and Muzzle Flash

Breaking down the elements of a gunshot will help you create realist in the scenes that you’re looking for. In this section, I’ll cover some elements you will want to examine. I recommend watching gunfire at slow speeds so that you can see the characteristics of each element clearly.

A muzzle flash is the visible light of a gunshot blast when hot air and gas erupt from the muzzle of a gun. Wikipedia has a nice breakdown of the characteristics of a muzzle flash.

Here is a summary of information from the Wikipedia entry on Muzzle Flash.

Talk to an expert on guns. Go to a gun range and film some firing with a video camera. Or, simply watch some YouTube videos with real weapons. Take notes on the size of the glow, the duration of flashes, how quickly the smoke grows, and how long the smoke takes to dissipate. And, of course, make sure that it matches the type of gun that you’re using in your film.

Most muzzle flashes that you see in movies are bigger and more dramatic than in real life. This is, of course, an artistic and dramatic choice but I’d recommend you know a little bit about the guns you’re showing so you aren’t completely off base.

The muzzle flash is fast!

It’s a “flash”, after all, so each blast of flames should only last a frame or two. Analyze videos of real gunshots by watching them frame by frame and you’ll see that it is indeed only a frame or two.

Even though they are fast, they are not identical. Sparks go in different directions. If you’re using stock footage, use some type of distortion on the flash to make each look different.

Mark Christiansen breaks it all down in Chapter 14: Pyrotechnics: Heat, Fire, Explosions in his book Adobe After Effects CC Visual Effects and Compositing Studio Techniques.

Yes, this book is really pretty old now, but if you can find a copy on eBay or in a used book store, it stands the test of time and I highly recommend it.

Create a bright orange spot (or whatever color your muzzle flash is) on the hands, arms, and face of the actor, as well as on the gun. This should only last as long as the muzzle flash.

The video below from Slow Mo Lab shows the reflection of the muzzle flash on the shooter’s hands, the gun, and more, and in slow motion.

Don’t make the smoke too prominent and know which guns create smoke and which do not. Make sure your smoke color matches your shots. If the smoke is shot over black, use a layer mode set to Add to easily key the smoke.

Make smoke with particle emitters or with plug-ins for creating smoke. You can also composite stock footage of smoke on your gunshot scene.

Here’s a fun read. Cracked Magazine gives some insight on gun myths in their article, 5 Ridiculous Gun Myths Everyone Believes (Thanks to Movies).

They talk about silencers, machine guns, and bulletproof vests. Thanks to Dan Warvi for the link.

Some guns come with suppressors that are meant to disrupt the shockwave of gas coming out of the barrel so the shooter is not blinded by the brightness of the gunfire. The FBI and ATF refer to suppressors as silencers, as do most movies.

Does your actor have a silencer on his gun? If this is the case, don’t add much or any muzzle flash but do include some smoke. Also, you’ll still want to add some sound effects, just quiet little “click-click”s and not big bangs.

The video below shows Baby Face P showing what a silencer sounds like in real life.

Get to know which type of shells will be shown ejecting from your gun if you’re adding them in digitally. Here’s a handy table of handgun and rifle cartridges.

Here’s an example of shells ejecting from an Airsoft gun, for reference.

Recoil is the backward momentum that is created when a gun is shot. The Wikipedia entry on recoil is quite interesting, talking about Newton’s second and third laws. There are two recoils when a gun is shot, the kickback from the escaping bullet and another from the gas that follows the bullet out of the chamber. For more on that, see The Physics of Everyday Stuff: Gun Recoil.

In Hollywood films, you’ll often see characters being thrown several feet back from a small handgun, but this may not be the case. Take into account the size of your actor and the type and size of the gun. For drama, though, you may want to include a bit more recoil than would exist in reality.

Edit out a frame during the actor’s faux kickback to make it look more realistic.
This tip is from IndependentVFX’s video: Tutorial: Muzzle Flash part 1, flash & smoke

Time to talk about the other end of the gunfire: the victim and anything hit by bullets.

Victims do collapse when shot but don’t fly backward from the momentum of the bullet. However, it’s your movie and if you want to increase the drama, maybe your actor needs to fly backward when shot. For more on this, check out One Shot Drops: Surviving the Myth, an FBI Law Enforcement Bulletin.

Show bullet hits, debris, and blood spatter in a cutaway shot. This way, you don’t have to affect the entire shot. It can be less work and you can emphasize small details.

The link below is from No Film School and it dives into the reason for cutaway shots. It explains how you can use them to direct your audience’s attention. In addition, they include some great examples.

Niko tells you how to make fake guns look real

Collider Crew is the expert on making realistic gunfire and they have some excellent tips in the video, below.