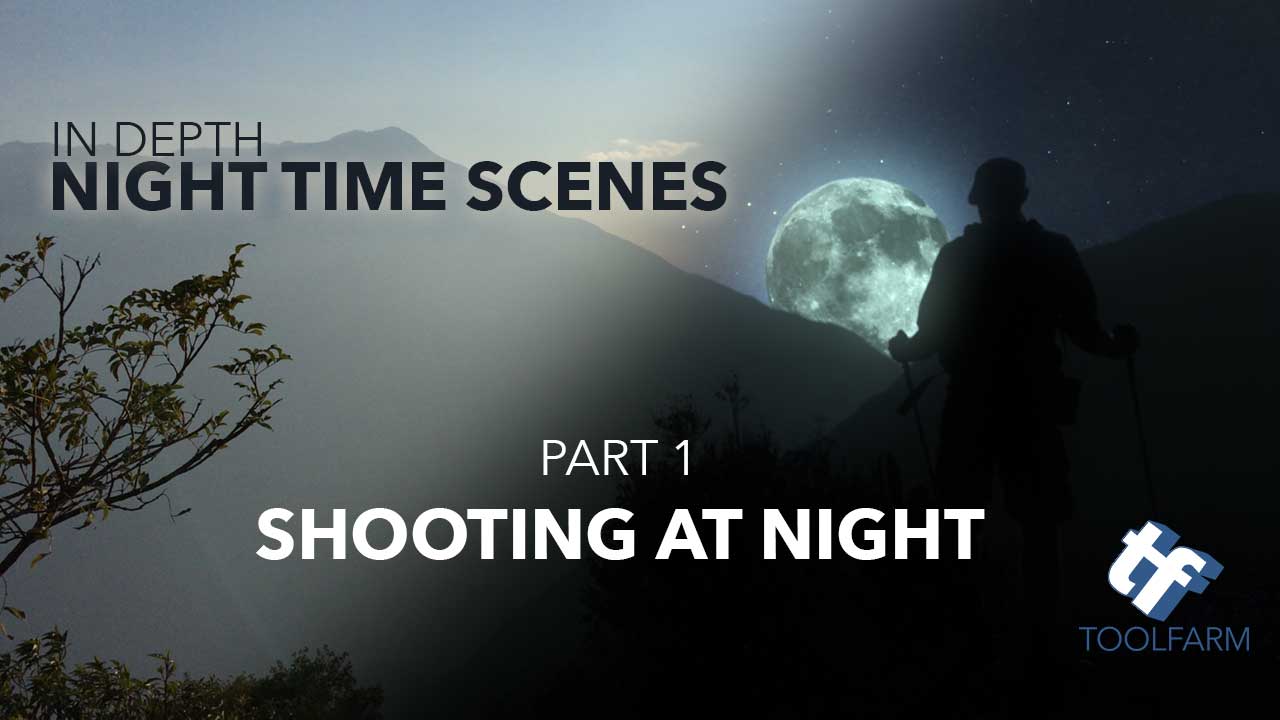 When and How to Shoot at Night

Night Time Scenes are common so it’s good to have a plan before shooting. If you’re new to filmmaking, Day for Night is a technique where footage shot in daylight is color graded to look like a night time shot. Day for Night was a popular technique in the last century in the film industry because cameras just couldn’t pick up detail under low light and the footage was often murky and grainy. Camera improvements with low light don’t require as much day for night. That said, if you need to add several visual effects, Day for Night can be very helpful. This article will focus on shooting at night vs. Day for Night and how to get the best results for whichever method you choose.

I’ve been holding off on publishing this article for a few days, waiting for the new Sapphire 9 release, since I’m including a few things from the package, and lo and behold, an article comes out at Premium Beat this week titled Cinematography Tip: Why ‘Day for Night’ Is a Horrible Idea from Caleb Ward. He makes some very good points, but there several for which I’d like to play Devil’s Advocate. Caleb’s points are in bold.

A few years ago I took on the role of VFX supervisor on a low budget film. My first day was the day that filming started so I didn’t have any say in how things were shot. The film took place in a cave-like dome with only a little light and many scenes took place at night with pouring rain. The cinematographer was a friend of mine and is very capable and talented. The scenes were shot handheld and were dark and had rain falling through a hole in the dome.

The footage looked great, however…

Some shots, the shots I was working with, required special effects. Some of the rocks in the stone dome needed to magically glow. Did I mention that the scenes were shot handheld and the lighting was very moody? Although the footage looked great, there were not tracking dots used. To make matters worse, the edges of the rocks were obscured by falling rain, created with hoses. The actress was running in front of the rocks, through the rain, so there was quite a bit of rotoscoping involved. No matter how much I tried to crank up the contrast to see the edges of the rocks and the actress, it just wasn’t happening. Also, the texture needed to be seen through the rocks when they glowed and they looked black.

I ended up asking the director to reshoot the scene because it was impossible to do what he was asking in the time I had. They reshot with studio lights and without rain and with tracking dots. The rocks were easily tracked and the actress was rotoscoped. The glow effects and rain were added. The scenes were graded Day for Night.

I ended up leaving the film production after about two months because of personal reasons. My grandmother was dying, plus I had a full-time job and a young daughter who needed my attention, so the job went to someone else. The final effects in the film were not my work, so, therefore, I will not show you any examples. It was not done the way I would have done it. The color graded day for night footage did not look nearly as good as the stuff shot at night, and I don’t know the process that they ended up using. I know they were trying to match footage from the original night shoot to footage shot during the day, which had to be quite a challenge.

What did I learn?

Even though I didn’t finish the film, I did learn a lot from my time on that production.

When and How to Night Time Scenes

DSLR Tutorial: How to shoot in Low-Light (at night) & how to reduce noise!

7 Strategies to Shoot Video in Low-Light

You may notice that many movies show wet streets at night. Hosing down the road makes the scene look cooler, the road looks smoother and helps set a mood. Your street lights will reflect a bit on the wet road. It can also be helpful for continuity. Make your street wet, whether it just rained or not.

Other resources to check out on shooting Night Time Scenes

One of the biggest problems you’ll encounter with footage shot in low light is noise. I did an In Depth article on the topic of noise removal.

If you’ve already shot in automatic mode, or your camera doesn’t have a manual mode, you may experience flicker. Here are a couple of tools I’d recommend to fix flicker.

Stay tuned for part 2 next week

Next week we’ll feature Day for Night color grading and plug-ins and a lot about adding night time elements to your scene to really sell it!