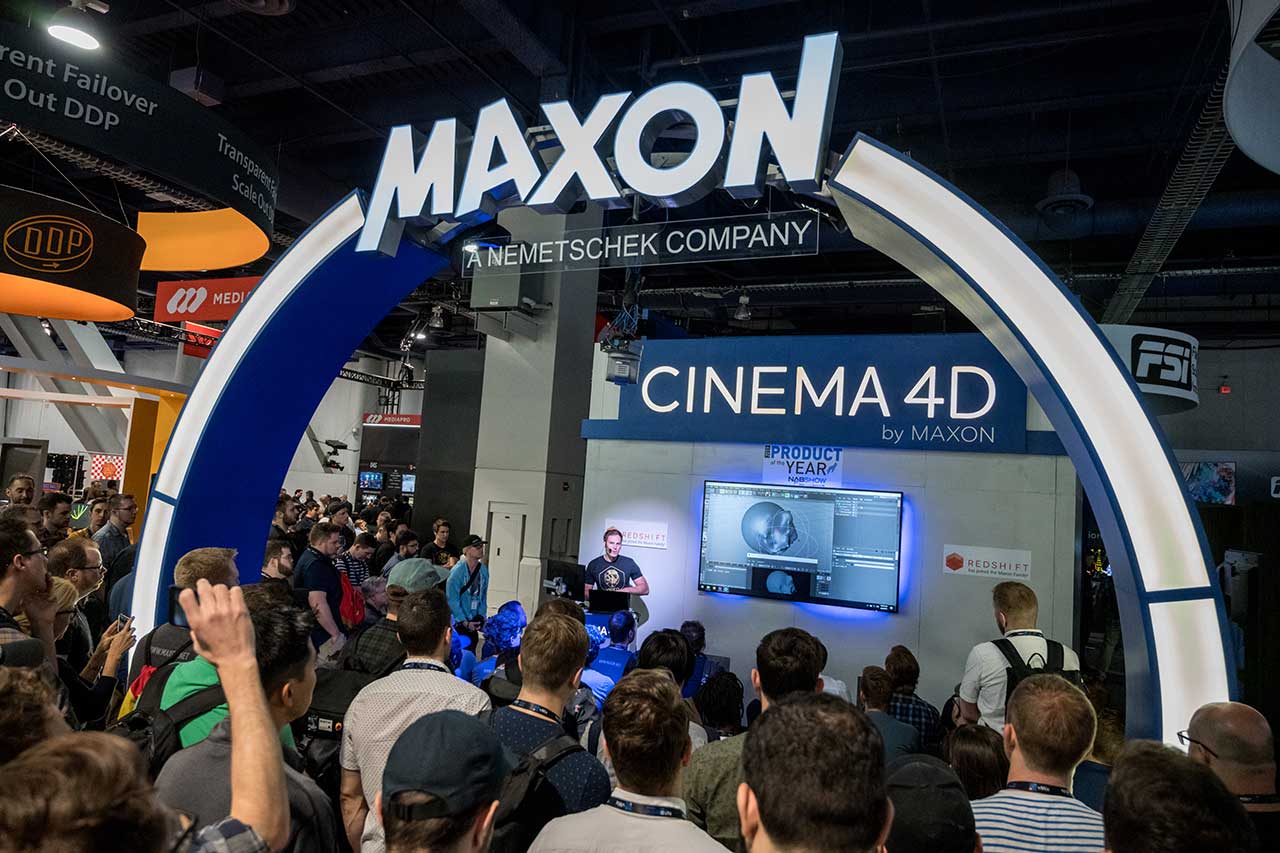 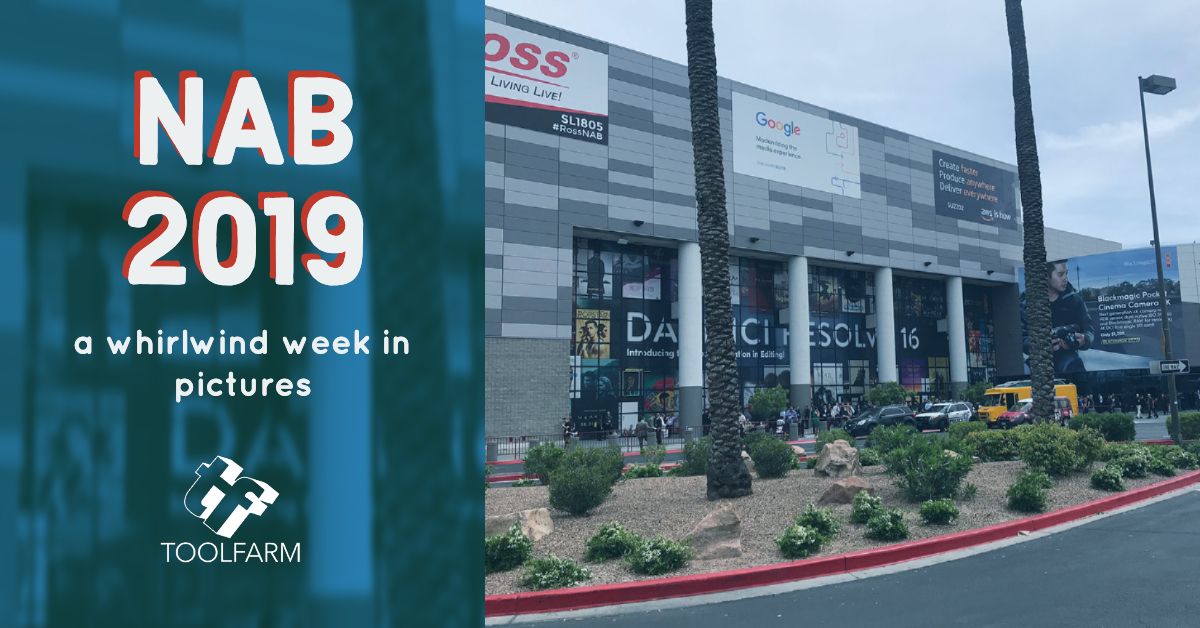 NAB 2019: A Whirlwind Week in Pictures

See photos from the Maxon Booth at NAB 2019, and much more!
View our NAB 2019 Photo Gallery

If you missed the Maxon Cinema 4D NAB 2019 live stream last week or you were at the show, watch it all now! There is loads of inspiring work and lots of great tips on improving your workflow. Maxon always gives us the presentations in bite-sized pieces but this year, you get them all at once.

The stellar line-up of guest artists scheduled to present at the Maxon NAB Show booth includes:

Aaron Covrett is a Freelance 3D Artist focused on texturing and look dev. He loves learning new tools and pipelines utilizing Cinema 4D. In his 2019 NAB Show presentation, Aaron shows us how to make high quality assets for huge scenes in Cinema 4D. He’ll show how he integrates 3rd party apps as well as go over VRAM optimization when using Octane Render.

Barton Damer is the owner and founder of Already Been Chewed. He has formed an awesome group of artists that have worked with Disney, Star Wars, Tiffany & Co., the NFL, the NBA, Nike, Under Armour, Vans, Marvel, & DC Comics and many more. Barton Damer will show how Already Been Chewed used R20 Fields and Redshift on a recent project. A key technique is how he mixed multiple displacements in Redshift to create a really awesome effect.

Brett Morris has been a long time Pixel Lab friend. We worked together on the Octane Material Pack and the Material Pack for Element 3D. He started up the creative design studio Ranger & Fox based out of Los Angeles.

Casey Hupke is a director and designer who has created generative art for brands like IBM, ATT, Exxon, BlackBerry, Cylance, and Buick. In this presentation he will show how to use mograph, the enhanced viewport, light a scene, and explore some forgotten tools inside Cinema. http://www.xcaseyx.com

Casey Latiolais works as an Art Director at Buck in Los Angeles, California. Casey shows how to make some realistic-looking animation using Cinema 4D’s MoDynamics.  He also gives some tips and tricks for fooling MoDynamics into doing what you want. http://www.caselat.com

Chris Priddy is a 3D generalist and co-owner of Fiveten Giant, specializing in the realm of photorealistic rendering, interactive content, product visualization, and general 3D animation and design services. He has taught animation at Purdue University and also worked directly for Maxon aiding the development of C4D. Chris will show you how to create a dynamic, self-driving version of the Halo Warthog in a spot created for Revell USA. He’ll be covering vehicle rigging, dynamics, and how to manually drive, or automate, the vehicle’s speed and direction with a bit of light Xpresso. http://www.fivetengiant.com

EJ Hassenfratz is an artist and educator who runs Eyedesyn.com. In this presentation he will walk you through Cinema 4D R20 Fields and Volumes. He’ll show you the new falloff Fields system as well as how you can use Field Objects to create complex animations and how you can combine them with Volumes to create dynamic animations. http://www.eyedesyn.com/

Handel Eugene is a Haitian American artist, specializing in 3D. He has worked for Apple, Facebook, & Google as well as on Marvel Films like Spiderman & Black Panther! He also teaches at Otis College of Art & Design as well as Mograph Mentor. He’ll share how to add depth, dimension, & animation to 2D design and illustration. He’ll show you the workflow he uses with 2D files in applications like photoshop and illustrator and how to import them into Cinema 4D. http://handeleugene.com

Ken Carlson is the Co-Founder and Creative Director of BIG MACHINE in Los Angeles. He’ll show you how he used C4D in projects from main titles to commercials to feature films. He’ll dive deep into the motion tracker, After Effects compositing workflow and integration with 3rd party renderers. http://www.bigmachine.tv

Lorcan O’Shanahan is a 3D Artist, UX Product Designer & C4D user. Lorcan shows you how previsualization is used in his production workflow. http://lorcanoshanahan.com

Michael Rosen runs Samplistic Media just north of San Francisco. He has worked for brands like Salesforce, Subway, NBC, Xbox, eBay, FedEx, Speedee oil, MTV, Microsoft and Honda. In this presentation he’ll show you past projects, explaining the techniques used and point out how he uses C4D in a wide variety of ways to create easier workflows. http://www.samplistic.com

Beeple is Mike Winkelmann, a graphic designer who has worked on concert visuals for Justin Bieber, One Direction, Katy Perry, Nicki Minaj, Eminem, Zedd, deadmau5 and many more. One of the OG grandfathers of the “everyday” movement in 3D graphics, he has been creating a render every single day from start to finish and posting it online for over ten years without missing a single day! This presentation shows Beeple making one of his dailies live. http://www.beeple-crap.com

This presentation is Beeple making his daily render live on the second day of NAB.

This presentation is Beeple making his daily render live on the third day of NAB.

Nick DenBoer is an Animator and Video Artist from Toronto. He’s developed a unique, absurd brand of VFX comedy and applies it to a wide range of commercial work. Nick honed his skills as a bit creator on Conan. He has directed and produced ads for Old Spice & KFC, music videos and tour visuals for deadmau5, countless TV shows, films, and web projects. Nick shows off techniques in manipulating photogrammetry scans to create 3D caricatures, optimizing dense projects for compositing, motion tracking and projection mapping with Octane, hacking Mixamo rigs to make mutant freaks and many more techniques to show how C4D can be used to make you laugh. http://smearballs.com

Thomas Brown is Creative Director at Vessel Studios which makes videos for the pharmaceutical industry. He has been sharing C4D techniques for visualizing the microscopic world since 2003. Thomas demonstrates how to use C4D’s new Volume Builder and Mesher to create intricate microscopic worlds. These techniques create blood vessels, glands, nerves, and other structures to make previously unattainable organic creations. http://vesselstudios.com/

Bryan is a creative director, motion designer, and style-frame artist. Bryan has worked with clients such as MPC, Framestore, The Mill, Toros Kose, Blacksmith, WeAreRoyale, HPE, Sarovsky, and Man Vs Machine. In this talk Bryan shows how he uses deformers, mesh tools, cloners, texturing and lighting. He also talks about using layers to stay organized and working with proper scene scale in order to achieve better results. www.bryancoleman.com 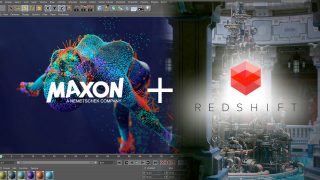 There was some big news at NAB from Maxon. Maxon was nominated for the product of the year at NAB 2019. Furthermore, Maxon also announced the acquisition of Redshift Rendering Technologies, Inc., developers of the Redshift rendering engine.Read more