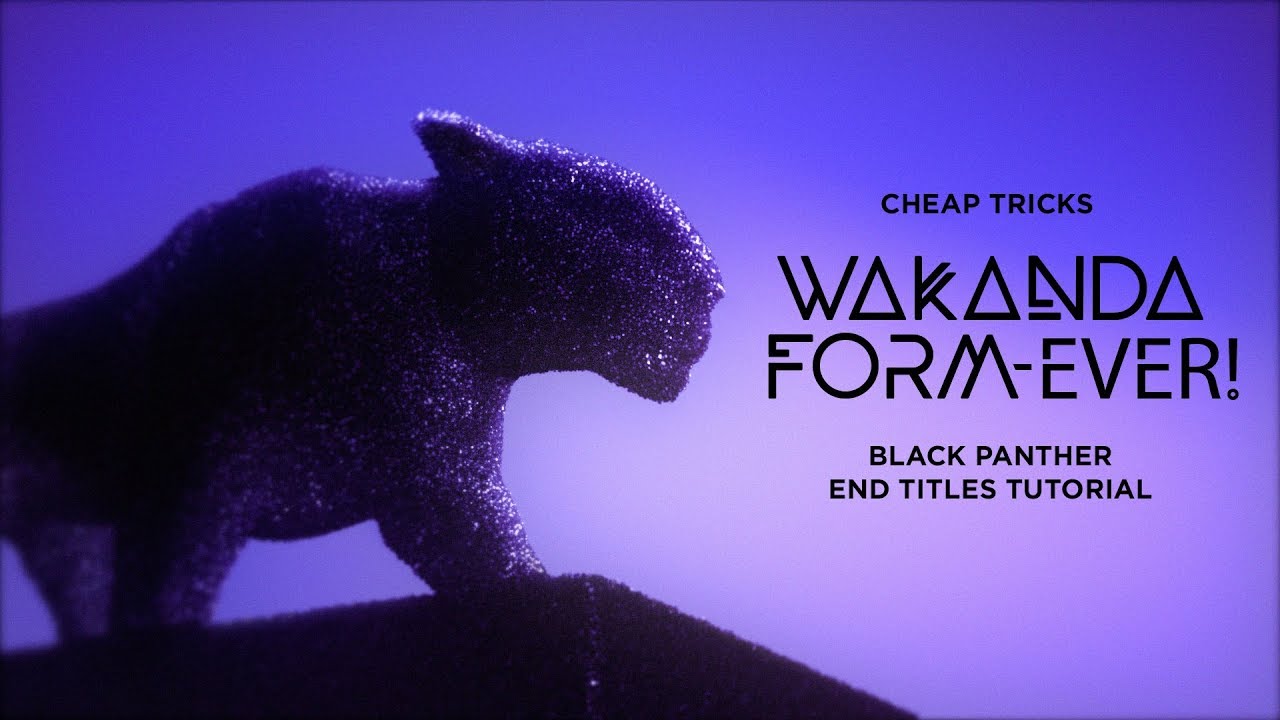 Portland, OR – June 6, 2018 – Action Movie Dad aka Hashi and Red Giant are back with the latest Cheap Tricks tutorial: Wakanda Form-ever! This time around, Hashi breaks down the visual effects from the main on end title sequence of Marvel Studios’ “Black Panther,” and chats with New York-based design firm Perception, who created the look of Wakanda's technology, including Black Panther's amazing intro and credit sequences.

Watch the latest episode of Red Giant Cheap Tricks to learn how to recreate the incredible Wakandan Vibranium sand and sand sculptures. For beginners, Hashi starts with a no-plugins approach and template. For more advanced users, he explains Trapcode Form's OBJ Model settings, teaching viewers how to create sand sculptures in true 3D space. Along the way, Hashi riffs on new skills to try and create something different using similar techniques.

Of the unique subject matter, Jeremy Lasky, co-founder and partner at Perception explains, “Wakanda is so much about this material, this element Vibranium, which is this metallic ‘particular’ substance that we were able to use to generate these holograms and then, of course, to generate the main on end title sequence. So it all flows together from the same DNA of the film.”

Says Perception art director Russ Guatier, “It’s an infinitely malleable substance that you can use for anything and you can create any potential interface out of that.” And according to John LePore, Perception’s chief creative director: “Vibranium just makes everything better.”

About Dan “Hashi” Hashimoto
Since early 2014, Hashi has used his CGI skills to turn his 3-year-old son James’ playtime into the viral web-series “Action Movie Kid,” which has earned 375 million views with over a million followers and subscribers on social media. For his ability to turn ordinary life into cinematic adventures, Toys “R” Us hired Hashi to co-write and direct over 60 commercial vignettes for their “C'mon Let's Play” campaign.  He and his wife Mandy Richardville authored an imaginative children's book adaptation of Action Movie Kid for Simon and Schuster. Hashi still performs occasional work for Disney, Sony, and Warner Brothers for work on upcoming feature film projects, but plans to venture into original series with his writing partners.

About Red Giant
Red Giant is a software company made up of talented artists and technologists who collaborate to create unique tools for filmmakers, editors, VFX artists, and motion designers. Our company culture is focused on finding balance between work and life – we call it “the double bottom line” – this philosophy helps us ignore complexity in favor of building simple tools that yield giant results. Over the last decade, our products (like Magic Bullet, Trapcode, Universe and PluralEyes) have become the standard in film and broadcast post-production. With over 200,000 users, it’s nearly impossible to watch 20 minutes of TV without seeing our software in use. From our experiences as artists and filmmakers, we aspire to not only provide tools for artists, but inspiration as well. Watch our films, learn from over 200 free tutorials, or try our software at www.redgiant.com.