In Depth: Creating Lofi Music & 10 Popular Tools to Help You Create It 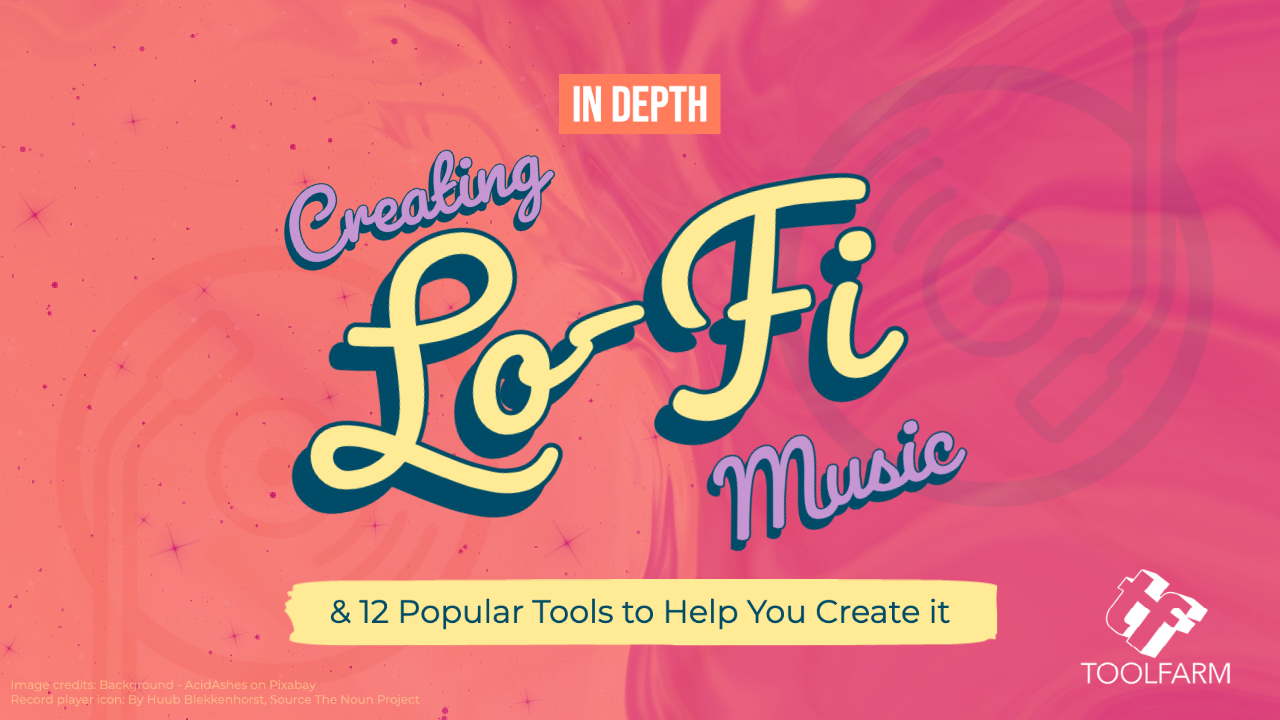 What’s in the Article

Lofi is everywhere and has been for a couple of years. Literally, 2 minutes ago, I saw an ad for Photoshop on YouTube with Lof music in the background. As I’m writing this article, Waves has a free Black Friday/Cyber Monday plugin called Lofi Space, which is still free for a limited time.

I hear it in the background on streaming shows as well and all of the time in my yoga classes. My daughter studies Joji lo-fi mixes to study. Yep, it’s everywhere. Artists like The Beastie Boys, Moby, Radiohead, Daft Punk, Air, The Mountain Goats, have used lo-fi sounds for decades. It’s definitely something that has appeal to multiple genres and generations. If you are still not certain about what Lo-fi is, listen to the example music below.

And, if you’re a dabbler in music but you have some serious creativity, Lo-Fi seems like a fantastic genre to just let those creative juices flow. Lo-fi could be really interesting to use on your demo reel, just saying!

So, let’s learn about the genre of music known as Lo-Fi. I’ll explain a few of its origins, then we will dive into how to create your own. We have a list of 10 popular tools for making your own Lo-Fi sounds, along with several freebies. So, get inspired and make some chill lo-fi beats!

What exactly IS Lofi?

“Although “lofi” has been in the cultural lexicon for approximately as long as “high fidelity”, WFMU disc jockey William Berger is usually credited with popularizing the term in 1986. At various points since the 1980s, “lofi” has been connected with cassette culture, the DIY ethos of punk, primitivism, outsider music, authenticity, slacker/Generation X stereotypes, and cultural nostalgia. The notion of “bedroom” musicians expanded following the rise of modern digital audio workstations, and in the late 2000s, lo-fi aesthetics served as the basis of the chillwave and hypnagogic pop music genres.”

Below, listen to a Spotify playlist that features Lofi Hip-Hop. There is likely some NSFW language in the mix so listen at your own discretion.

Are you feeling the vibe yet?

There are a lot of tools for adding a lo-fi vibe to your music. Below are some popular tools that work with a variety of DAWs. They’re grouped by the effect that they provide to Lo-Fi Creation:

Retro Fi is a new plugin from Waves, billed as “the ultimate lofi FX chain, with everything you need to produce authentic lofi textures, warm analog sounds, and mesmerizing nostalgic vibes.”

Below, watch the tutorial from Sean Devine, explaining how to mix lofi beats. Be sure to download the free presets too. 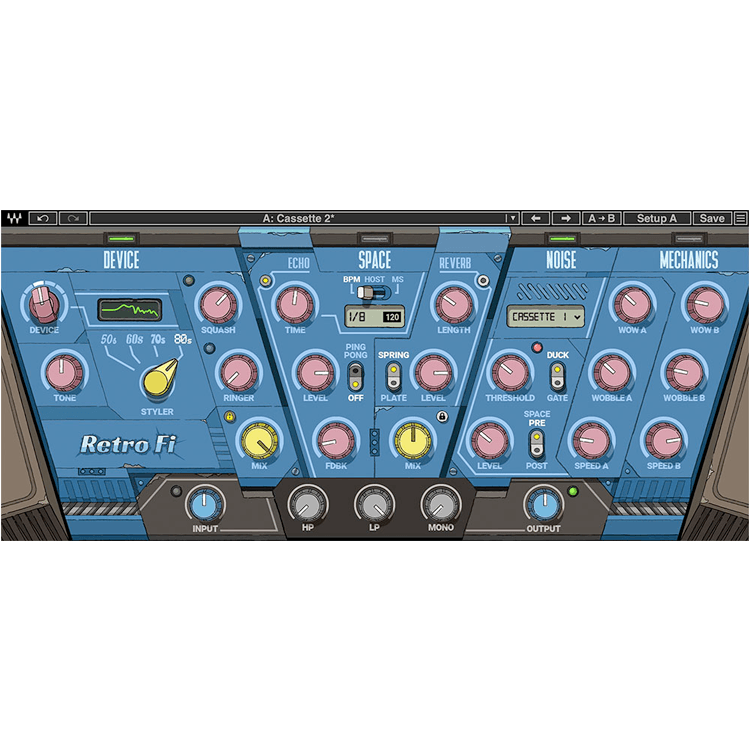 Spark real life in your tracks: Retro Fi is the ultimate lofi FX chain, with everything you need to produce authentic lofi textures, warm analog sounds, and mesmerizing nostalgic vibes.

Waves Retro Fi is also included in the following bundles from Waves. 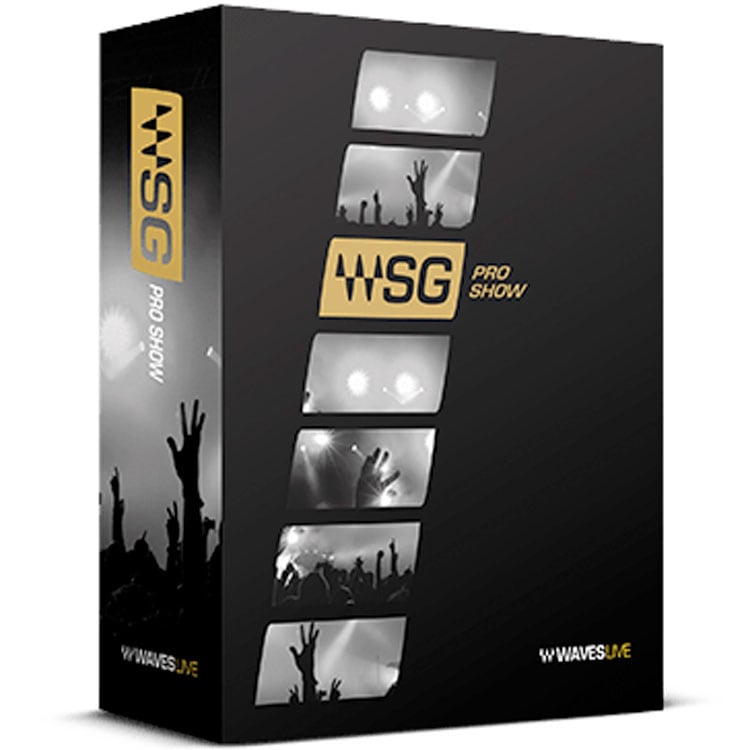 Over 120 plugins for SoundGrid® systems 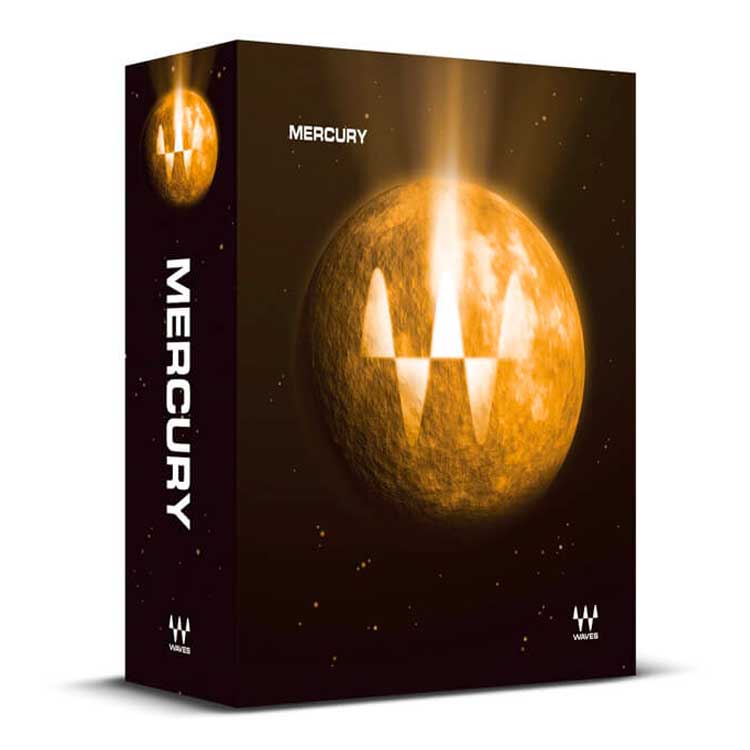 With 172 stellar plugins and more than 400 components, Mercury features more Waves in one package than ever before!

From equalizers, reverbs, compressors and limiters to noise reduction, surround processors, modeled analog console modules, Signature Series collections and beyond, there has never been such a comprehensive collection as this. The Mercury bundle offers more effects, more channel components, and more mixing tools than ever before in one place.

Another new plugin from Waves is Lofi Space, a “Lofi-style reverb and delay plugin”. By the time you see this, it may no longer be available for free, but it’s included in Mercury and Pro Show, as well as on its own. Because it’s so new, I wasn’t exactly sure where to put it in a category so it gets second billing here.

Get Lofi Space for free

A bitcrusher is an audio distortion effect that reduces your fidelity and makes it sound… well… crappy. [3]

Decimort is one of those tools that I often see mentioned in Lo-Fi forums and websites. 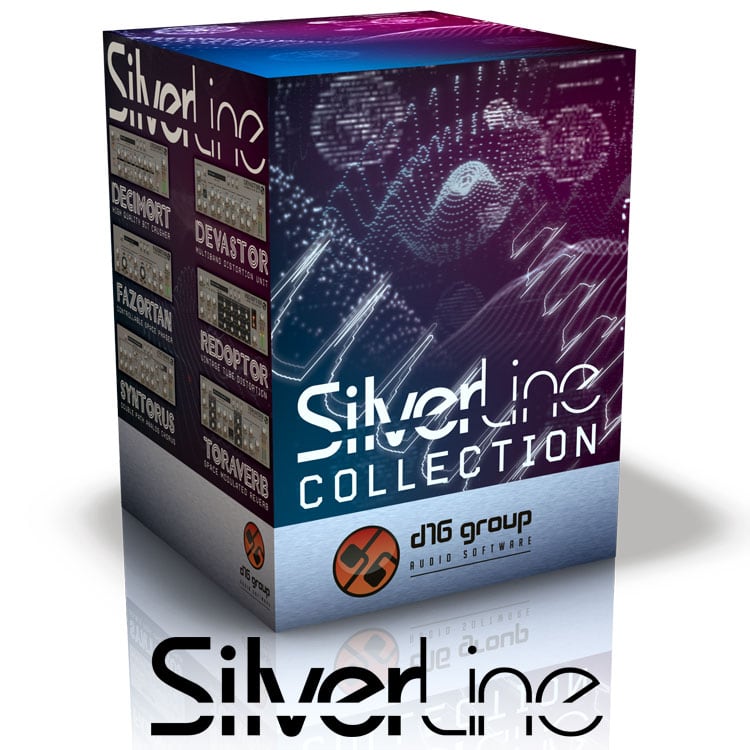 Although this bundle comes with all sorts of cool plugins, for Lo-Fi you need Decimort 2. It's a premium grade bit crusher with complex and advanced signal processing algorithms within Decimort simulate the behavior of the whole sampling path which exists in every AD/DA converter.

TAL-Software TAL-Bitcrusher includes “low and high shelf EQ and a noise cross modulator included.” Try it on drums! It comes as a VST for Mac or Windows.

Get TAL-Bitcrusher
More from TAL Software

Low-frequency irregularities (as one per revolution of a turntable, referred to as “once arounds”) cause wow and are recognized aurally as fluctuations in pitch. Irregularities that occur at higher frequencies are called flutter and cause a roughening of the tone: a piano sounds like a harp, and voices waver with small, rapid variations above and below proper pitch.

“Flutter and Wow” is a fancy term for irregularities that show up with tape or vinyl when the speed changes. This is the sound that I often associate most with lo-fi music, and it’s the most jarring during a yoga class!

In the real world, flutter and wow are caused by an off-center hole in the record or high spots on the tape rollers.[3] In addition, the effect is heard when the tape doesn’t have consistent tension between the reels. I worked at a post-house in the 90s and this is a familiar sound to me.

Rumble is also a sound artifact from tape and vinyl, usually caused by vibrations in the machines.

The following plugins create Flutter and Wow effects, and also some rumble.

U-he Satin is “A stunningly realistic and surprisingly creative tape emulation at a price that makes it nothing short of essential”, according to a review on Music Radar. You can’t get much of a better review than that. In another review, below, White Sea Studio says it’s the best tape simulation plugin out there. 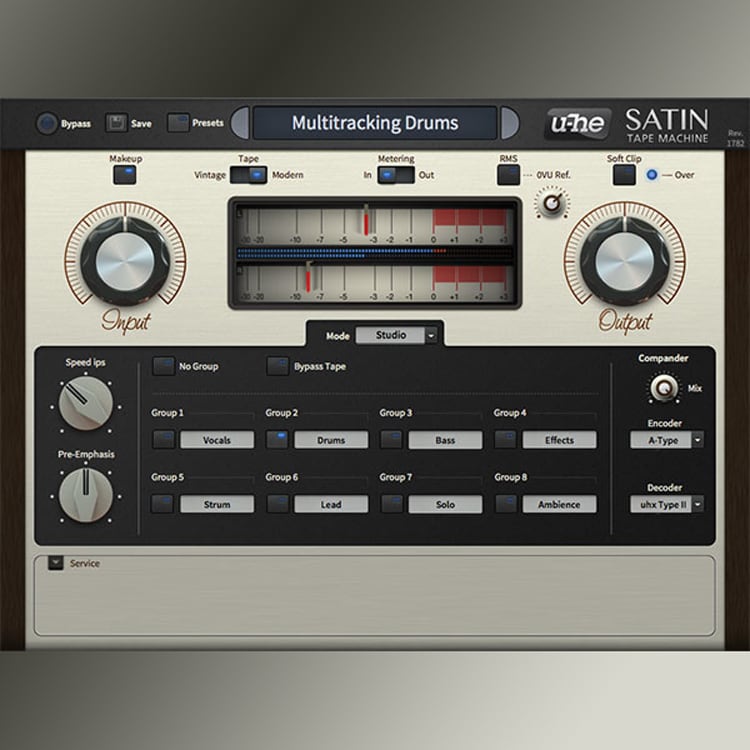 Nothing else quite sounds like tape. Satin puts the legacy of tape recording in your hands: from top-of-the-line multi-track consoles to humble cassette decks. All the good (saturation, transient smoothing, compression), as well as the bad (noise modulation, flutter, hiss) qualities, are under your control. Construct your (im)perfect tape machine.

In the video below, Wave Magnetik tells you how he created a lo-fi piano and more with Waves Kramer Master Tape. 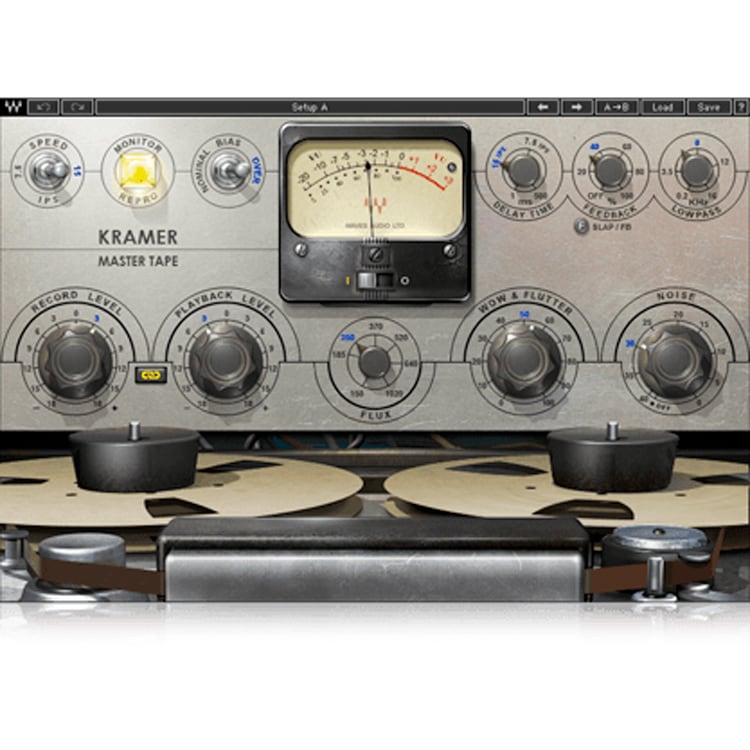 Vintage tape sound to add wow & flutter to your lo-fi

Waves J37, an emulation of the Abbey Road classic tape recorders, gives your recordings a vintage tape sound. As he says in the video below, it’s a classic tape saturation tool but many artists use it as a creative tool, adding wow and flutter, tremolo, delays, and more.

In the video below, Audio Tech TV walks you through a few ways he uses J37 tape in his mixes. 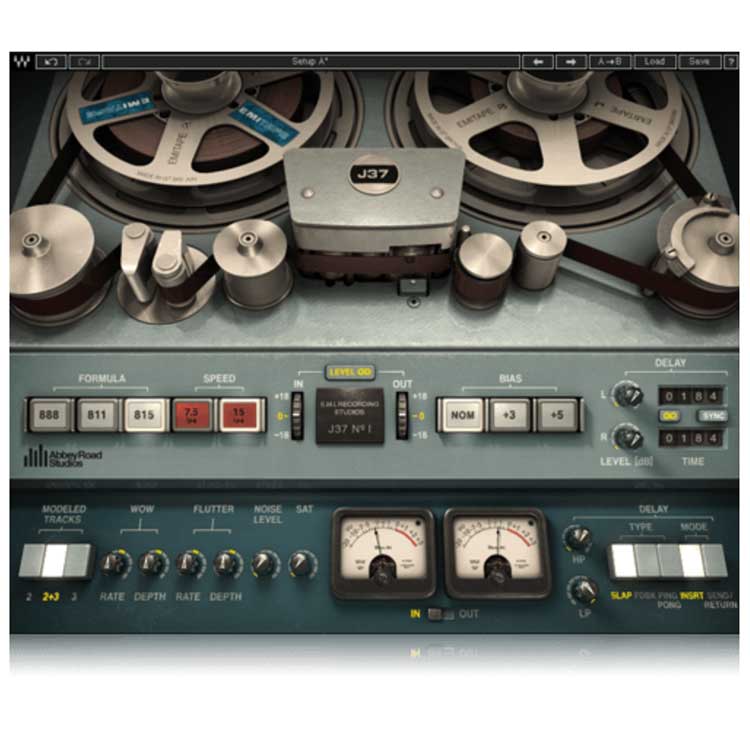 Brings stunning analog warmth to your digital recordings, delivering a level of hardware realism never before experienced 'in the box.'

Waves and Abbey Road Studios present the J37 tape saturation plugin, a precision model of the very machine used to record many of the greatest masterpieces in modern music. With a variety of user-adjustable controls including Tape Speed, Bias, Noise, Saturation, Wow and Flutter, the Waves: Abbey Road J37 faithfully recreates the inimitable sonic signature of the original machine. 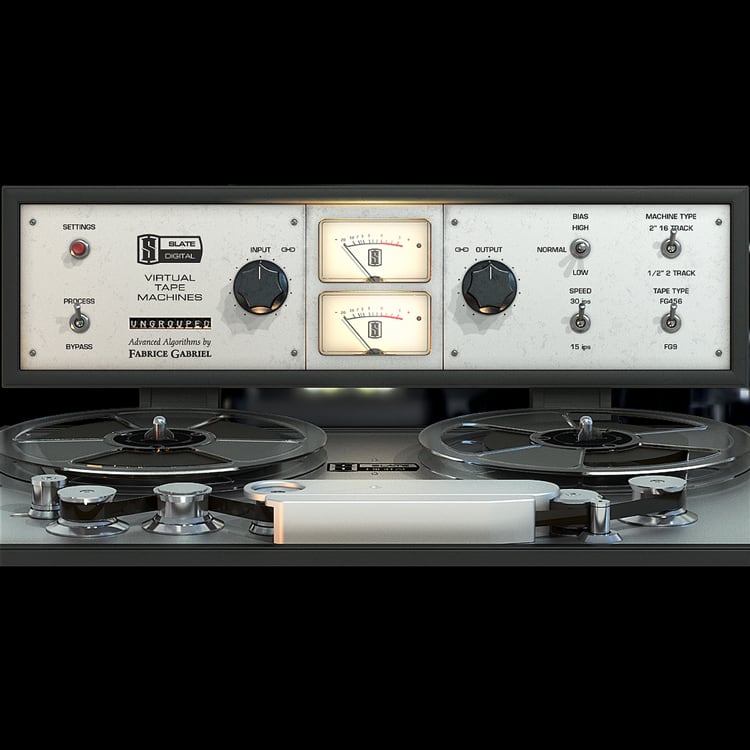 Get that Analog Tape Machines SOUND.

Big, fat, warm, deep, rich, and exciting are just some of the terms used to describe what recording onto a piece of magnetic tape sounds like. Most of all, tape is more musical. To capture the sound of tape is to capture a living, breathing sound that dynamically reacts to the music going on to it. Slate Digital Chief Technology Officer Fabrice Gabriel utilized his electrical engineering degree as a foundation for his comprehensive study of the physical processes that occur when recording analog tape through a tape machine. What began with science led to Fabrice’s discovery of the seemingly magical properties of tape and inspired him to create his most advanced, dynamic algorithms yet.

Vinyl has become the ultimate lo-fi tool for adding character to tracks. I’ve used it on projects for The Strokes, The Shins, My Morning Jacket, and Morrissey. I’ve used it on acoustic guitar, strings, and drums. My favorite is the year control — I loved dialing an orchestral string sound back to the 1930s.

iZotope Vinyl was updated about a year ago with a clean new UI and all the new lo-fi features! Give instant vintage character to your audio. Vinyl simulates the dust, scratches, warp, and mechanical noise reminiscent of yesteryear for FREE.

With integrated support for most modern host applications, Vinyl is sure to have a place in your workflow.

Unparalleled ease of use

A simple, clean UI helps cut down on learning time so you can get right to crafting believable vintage effects.

iZotope, Inc. · Spin Down On Master Bus Before

iZotope, Inc. · Spin Down On Master Bus After
Get iZotope Vinyl for Free 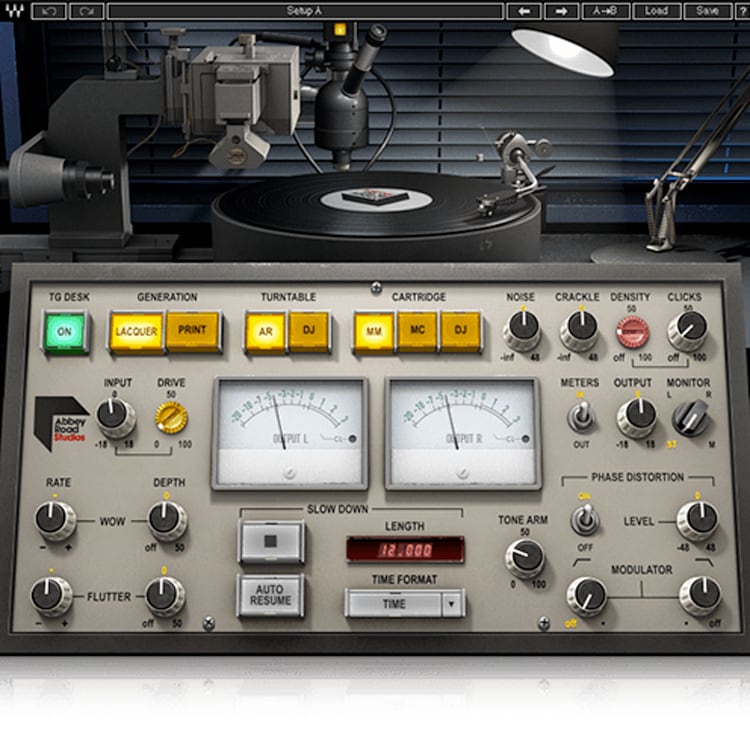 Give your music the vintage warmth of vinyl records played on classic turntables and needles.

FutzBox is a tool for the simulation of radios, cell phones, and televisions. 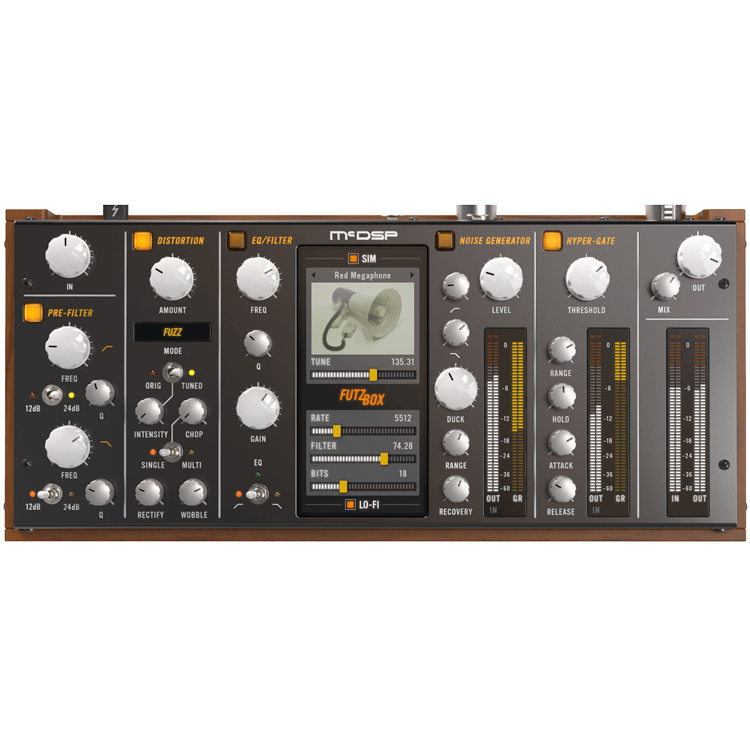 FutzBox is a distortion and noise generator plug-in for creating low fidelity versions of audio signals.

[product_short_snippet product_id=22853 demo_id=13375 tagline=”A great tool for delays, telephone effects, old radio sound, tape delay and more!” description=”Repeater is a collaboration between Slate Digital and D16. It’s a dual-delay powerhouse that features 23 authentic delays ranging from classic oil cans and plates to the most famous vintage digital designs. It’s packed with sounds and cool features that will add depth to your mixes, and all of that versatility comes with a user interface that’s immediately easy to understand and tweak.”

The Art of Lofi

Focus… (Dr. Dre, Anderson .Paak) and Iman Omari (Kendrick Lamar) talk about creating Lofi (aka “straight-up beat culture”). Focus and Iman walk you through making beats in an analog method. Below, a tutorial about how to add Lofi sound tutorials with free presets.

Episode 2 comes out November 29 and we’ll add it to this page.

How to Add a Lo-Fi Vintage Vibe to Your Tracks

In the tutorial below, David Ampong shows you how to create that gritty, dirty, lofi sound. He also has some free Lofi presets for download.

Tools mentioned in the video below include the following plugins from Waves:

Get the free presets (requires a login to Waves website).

In the Mix shows how he mixed a lo-fi track for his video. Indeed, he has loads of great advice on mixing, using a top-down approach.  He uses the free iZotope Vinyl plugin, below, among other tools

Plugins that he used in this video include:

Sources for this Article