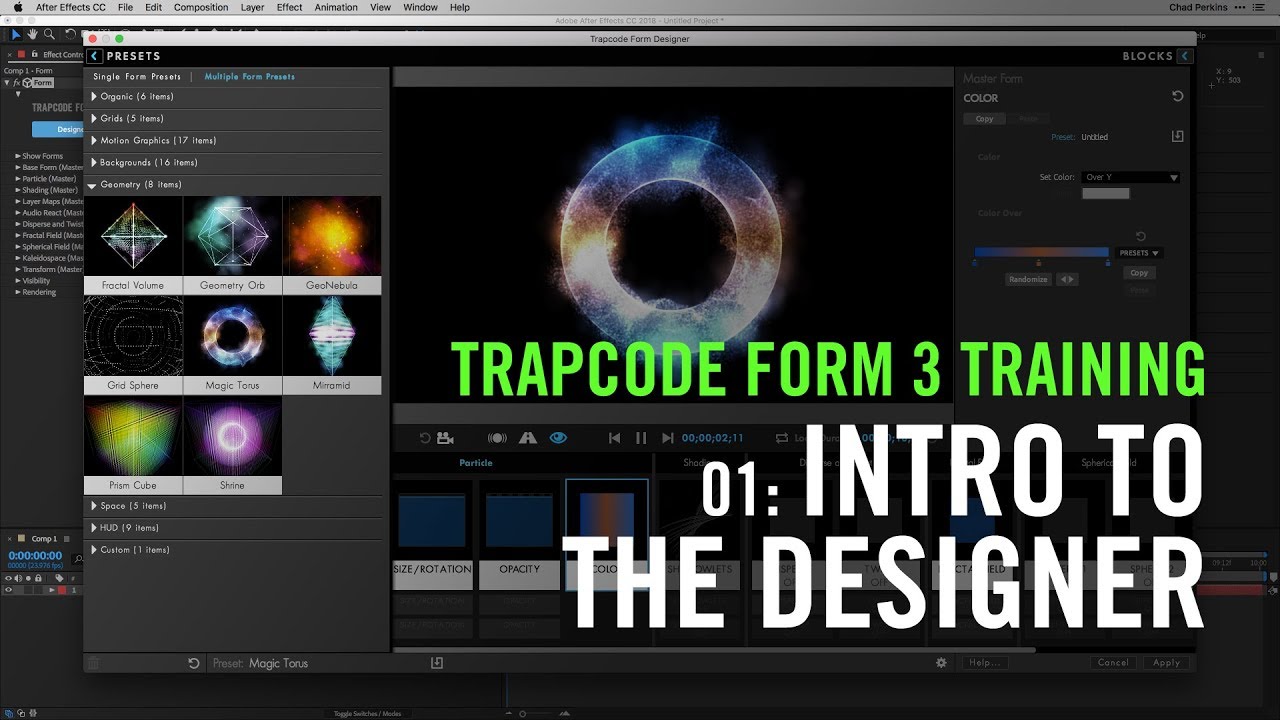 Red Giant has released a free 12 tutorial series for Trapcode Form 3, taught by Chad Perkins. Here are the first 3 tutorials in the series, and the press release from Red Giant.

01. Intro to the Designer

02. Base Form And Particles

Watch the other 9 tutorials at RedGiant.com

Portland, OR – June 19, 2018 – Red Giant has just released a brand new Trapcode Form 3 training series, available free of charge on the Red Giant YouTube channel and led by award-winning filmmaker and motion designer Chad Perkins. The new training videos are the latest to come out of Red Giant, on the heels of the captivating short film “TANK,” created by ILM veteran Stu Maschwitz, and Dan “Hashi” Hashimoto’s “Cheap Tricks: Wakanda Form-ever!” where he demonstrates how to use Trapcode Form’s OBJ Model settings to create sand sculptures in true 3D space.

Part of the Red Giant Trapcode Suite, which just got an update in April, Trapcode Form 3 is a unique and powerful 3D particle system for Adobe After Effects, used in broadcast and feature films. Whether you’re creating motion graphics, fantasy user interfaces or audio-driven effects, Form gives you the power to build beautiful effects fast. But, Form is unlike other particle systems and so feature-rich that it can be a little daunting to get started with it. Even if you’ve been using it for years, it’s packed with so many hidden features there’s always more to learn – which is why Chad Perkins will show users everything to know when using Form to its fullest. Red Giant’s Trapcode Form 3 training series videos were designed for everyone from beginner to experienced user.

This past April, Red Giant released Trapcode Suite 14.1, a free update to its suite of 3D motion graphics and visual effects tools for use in Adobe® After Effects®. As a part of that release, Trapcode Form was updated to version 3.1, with new features and capabilities including: