In Depth: Troubleshooting After Effects Issues and Plug-ins (Updated 17 Dec 2018) 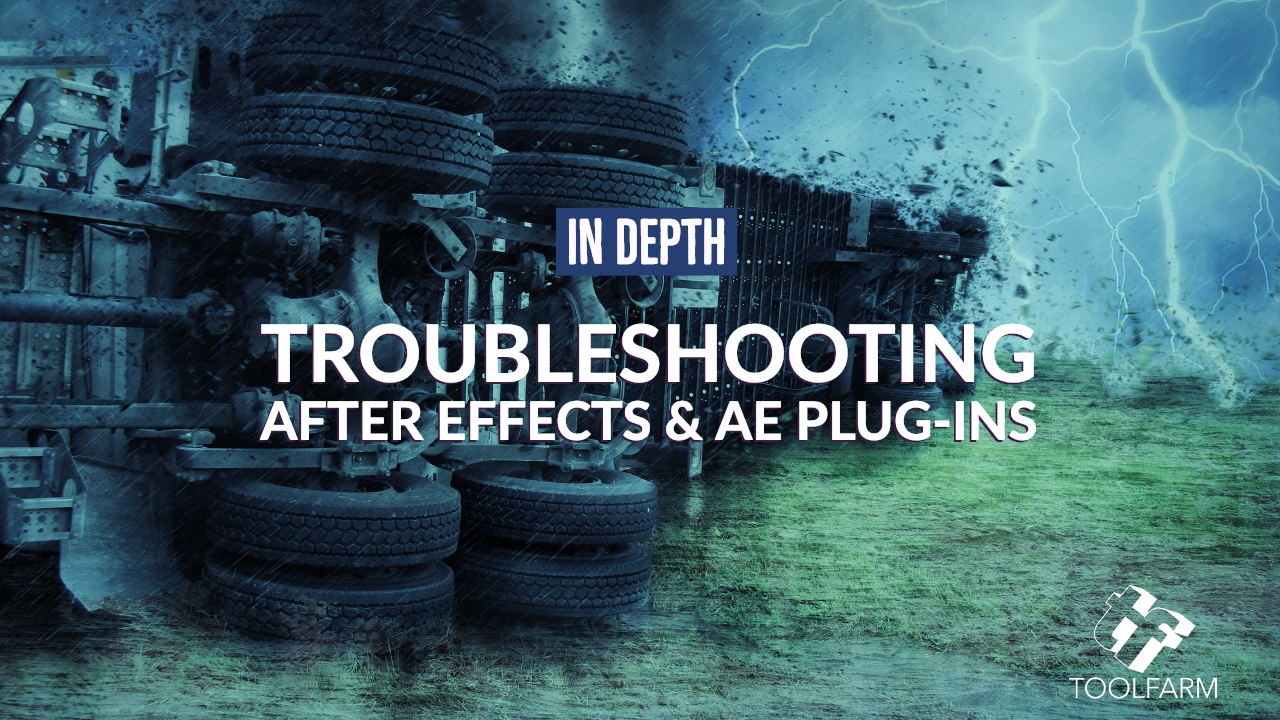 December 17, 2018
Even though After Effects is a very solid product, everyone will run into issues from time to time, whether it be from corrupt preferences, random errors, codec problems, and more. Here is a general problem-solving guide on how to troubleshoot some common issues with After Effects.
Updated 17 December 2018 with more information about video codecs.

This is a living guide that will be updated and changed over time. Troubleshooting an extremely broad topic and each issue can occur from a slew of circumstances. This also covers multiple versions of After Effects so the version number is not always stated. This is a guide to help you troubleshoot issues… to put you on the path and doesn’t guarantee that this advice WILL fix your issues. If you have anything that you think we should add or change, let us know.

An After Effects artist I know contacted me with some issues. He was taking stop-motion footage and he had it in 4 different comps. By the time it got to the fourth comp for Color Correction, the sync was off. The frame rates were consistent throughout. He did take it into Premiere for editing, but everything was fine from that point. The source of the problem could not be discovered. I had him remove the color correction effects but the problem persisted. In the end, I told him to recreate the final comp and try again, and this time it worked. What was the problem? We have no idea, but it works now and that’s really what is important.

Quite often you know where a problem comes from, but sometimes it isn’t so obvious. Sometimes there are conflicts with plug-ins, known memory issues, or a corrupt file, but a lot of times, there’s no easy answer. How do you fix something when you don’t know the cause?

Here are some general troubleshooting tips on how to fix issues you may encounter:

Restart After Effects (or whatever software is giving you issues). This can fix quite a few problems.

Reboot your computer. After things are up and running, restart the application and see if bugginess has gone away.

Make sure you’re running the latest versions of all your software and plug-ins. Run the Adobe updater and reinstall the plug-ins to the latest versions. Most dot updates address bugs and other issues that users find. Your problem may already be fixed.  This is especially important if you’ve updated your host software but not your plug-ins. Some require a newer version of the plug-in to run with the newer software, patch or driver.

Try and recreate the issue in a new comp. Create the comp exactly as your old one, applying effects and adding elements piece by piece until the problem recurs. If it doesn’t recur, problem solved.

Does a crash occur repeatedly at a certain point in your video? That points to a bad frame. If you can get the original source re-exported, that may fix the issue.

b It’s likely that it was exported with a codec that you do not have on your computer. Get that codec installed or have the editor export the footage in another format.

Remove or disable each effect applied one by one until the problem goes away. This will help you find an issue caused by a specific plug-in.

Un-install any recent software or hardware changes. Something new on your system could be causing the issue. I rarely run into this problem anymore but it’s still a good idea to backtrack.

Un-install software or plug-ins and re-install it. Sometimes something happens during installation that causes an issue and a reinstall can fix it.

Check for viruses and malware. Symptoms include crashes, running slow, popup ads everywhere, your browser is being redirected, warning messages from unknown apps, and more. See: 13+ Warning Signs that Your Computer is Malware-Infected [Updated 2019]

Defragment your hard drive or run Disk First Aid. This can take some time but it can fix issues with preferences and other elements. It’s good to run this type of thing as general maintenance. Says Jason Sharp, Toolfarm’s president, “Repair Permissions is always a lifesaver.”

How to Reinstall an Older Version of After Effects

You can go back as far as After Effects CS6 if you have Adobe Creative Cloud.

Reset Your After Effects Preferences

Pitching or resetting my prefs is something I used to have to do all of the time in the old days when AE was giving me problems. These days, things run pretty smooth so I haven’t had to do this in a while. It could help!

To Reset your After Effects Preferences:

In After Effects CS6, you’ll have to manually throw them away.

There is more in Adobe Help about After Effects Preferences.

I had some bad RAM in my computer for much too long which caused a lot of crashing. I ended up just pulling it out and going back to the 16gb standard RAM that shipped with my computer. I’m so glad that I kept it! I’m all too familiar with the “After Effects error: Cached Preview needs 2 or more frames to playback” error!

In the video below, School of Motion has a lot of great tips on dealing with memory cache issues. 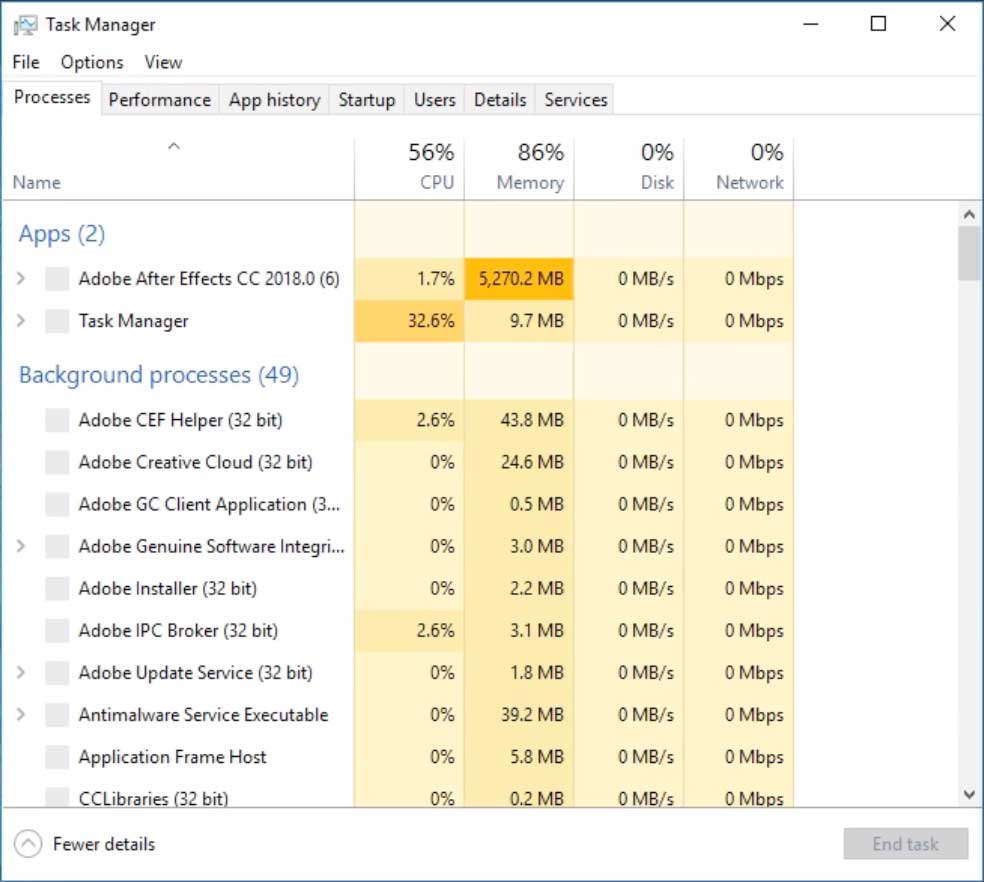 On Mac OS X: In Applications > Utilities, view the Activity Monitor. This will tell you what’s eating up your memory. 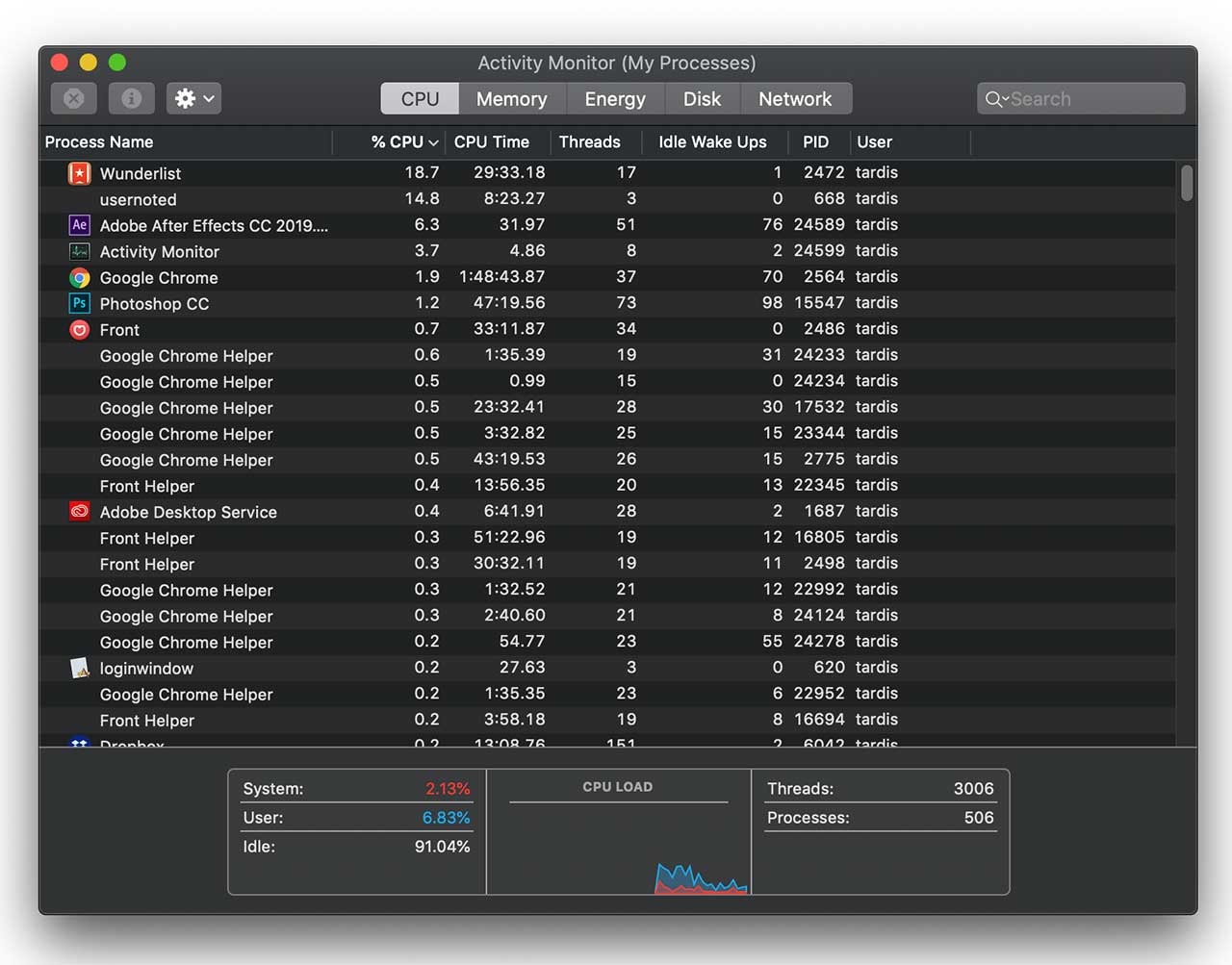 Obviously, make sure you know what it is you’re shutting down if you’re quitting processes from the Activity Monitor. You can shut off something critical and crash your machine.

One user had issues with non-Intel hardware and the UI speeded up quite a bit after swapping chips.

QuickTime 7 codecs are no longer supported in After Effects, Premiere Pro, and Adobe Media Encoder. In April, Adobe announced that it “will no longer support legacy QuickTime 7 era formats and codecs starting”, starting with the April 2018 release of Adobe products. The codecs that are affected by this are Cinepak, Graphics, and Sorenson. ProRes, DNxHD, and Animation codec are not affected by this change. Read the info from Adobe: Dropped support for QuickTime 7 era formats and codecs

This is more of a future warning than something you have to worry about this minute, but it’s worth preparing. Once you’ve updated to the next OS after macOS Mojave (10.14), older 32-bit codecs will no longer play your footage at all. This will affect Adobe products, as well as Final Cut Pro X, Avid and others. These codecs include:

You want to “future proof: your media, so converting it while it still plays is a good idea. If you need to use old footage with one of these codecs and you don’t have an old computer that can play it, here are a few ideas.

If you’re running into an issue where MP4 videos import and need to be immediately relinked and show up as AVIs, the problem is caused by old CineForm plug-ins. This was discussed on a Reddit thread and the problem was solved by @blinnlambert:

To solve this problem:

Good news! The December 2018 update adds ProRes 4444 and ProRes 422 export to After Effects, Premiere Pro, and Media Encoder on macOS and Windows 10 to the video applications in Adobe Creative Cloud. Update your software through the Creative Cloud desktop application. This will definitely improve workflow moving across platforms. Read more

QuickTime Errors with After Effects CS5, CS5.5, and CS6

Todd Kopriva put up an article in 2011 about troubleshooting QuickTime errors in AE. He covers:

Basically, make sure that your QuickTime version is compatible with your version of After Effects. Todd gets much more into specific errors and failures and how to fix them. If you’re getting QuickTime errors, this page should help.

Mylenium used to have a comprehensive list of error codes but Mylenium no longer keeps it up. He had said that they come up under a million different circumstances so the error codes don’t necessarily help unless the context is known. There is no list that I know of but if you have a resource, please let us know.

Installation error codes: Find the solution for your error code

If that doesn’t answer your question, dig through forums like Adobe After Effects forums, Creative Cow forums, etc. It’s not likely that you’re the first person to experience the issue. Someone will hopefully tip you off on what is causing the problem and how to fix it.

We’ve been hearing about some bugginess with aerender. Many people have been able to fix their problems with the following solutions:

I have A LOT of plug-ins installed and sometimes I get these errors all the time. This is often a problem if you are running multiple versions of After Effects or beta versions of AE or plug-ins on your machine.

Sure, you can remove the offending plug-ins but what if you want to keep everything on your machine but want to temporarily disable them? Here’s how!

How to disable plug-ins without uninstalling

A specific plug-in is not working as it should

Know the limitation of the plug-ins. Some plug-ins just don’t do as much as some users expect. Some will not work with trimmed clips or they are just not made for what users want them to do. Do your research and try a demo before buying a plug-in. This seems to come up quite often with Red Giant PluralEyes.

Stacking effects on a layer can sometimes cause alpha channels not to work. You may need to pre-compose to get around this issue.

A plug-in won’t show up under the Effects menu

If you’ve installed the plug-in, and you’re not seeing it:

Did you restart AE after installing the plug-in? You have to do that.

Did you accidentally install it for an older version of AE and it’s in the wrong plug-ins folder? It happens more often than you think!

Did you check system requirements first? Will it work with your version of AE? Some old plug-ins that don’t have installers will not give you errors. You just won’t see them.

Is it supposed to show up under Effects? I have been thrown by a couple of products that are for working with 3D layers. They do not show up under Effects but under Keyframe Assistant. For example, Zaxwerks 3D Layer Tools is a 3D workflow tool and a huge time saver for working with 3D layers. It simplifies distributing and moving layers in Z-Space without changing their screen size. It allows the user to scale, rotate and move several layers at once. It even lets users match frames between a 2D and 3D layers, which can be a challenge. It will not show up under the Effects menu, however.

With Adobe Creative Cloud 2019, you can use unlimited fonts with Typekit, now called Adobe Fonts.

A known issue is that some fonts won’t show up in the new font list in the Character Panel. Adobe has some troubleshooting tips for this issue.

We’ve heard multiple times about people having annoying issues where the color doesn’t match on export. This is something that has been around a very long time and there is no easy fix, unfortunately.

Kevin Monahan of Adobe says that users should not use QuickTime Player to gauge color accuracy, and recommends using VLC Media Player instead. He also said to use After Effects Color Management.

In the Color Settings for the project, check the Color Management settings and learn about how they work.